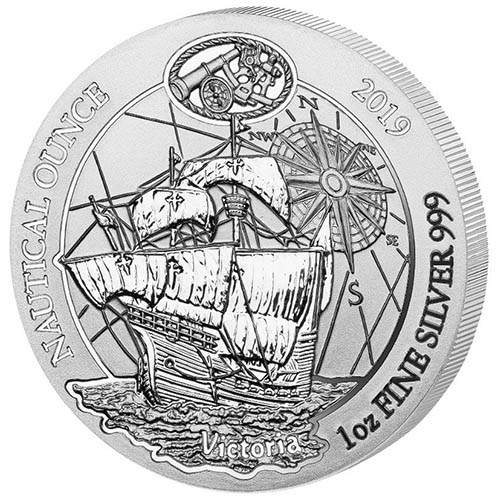 The Nautical Ounce Series is issued on behalf of the Republic of Rwanda with the backing of the Central Bank of Rwanda. The coin series debuted in 2017 with a depiction of the Santa Maria, the flagship of Christopher Columbus during his voyage that led to European discovery of the Americas. Victoria, the flagship of Ferdinand Magellan, is now depicted in this coveted series. Right now, 2019 1 oz Silver Rwandan Victoria Nautical Ounce Coins are available to purchase online at Silver.com.

Each 2019 1 oz Silver Rwandan Victoria Nautical Ounce Coin in this product listing is in Brilliant Uncirculated condition. The coins are available individually inside of protective plastic pouches or as multiples of 10 housed inside of mint-sealed sheets.

On the obverse side of 2019 1 oz Silver Rwandan Victoria Nautical Ounce Coin is the image of the Victoria. The vessel was the flagship of Ferdinand Magellan during his expedition to circumnavigate the globe.

Victoria was the only ship of the five gifted to Magellan by King Charles I to survive the trek. The Trinidad, Concepcion, and Santiago were damaged during the expedition and scuttled on purpose or later sank on their own.  The San Antonio deserted the expedition group during the navigation of the Straits of Magellan and returned to Europe on its own.

The reverse side of 2019 Silver Rwandan Victoria Nautical Ounce Coins includes the seal of the Republic of Rwanda. The seal includes a traditional hut in the center with native plants flanking on either side and includes the battle shields of tribal warriors.

If you have any questions about these silver bullion coins, please feel free to reach out to Silver.com. You can contact us on the phone at 888-989-7223, chat with us live online, or email us directly.