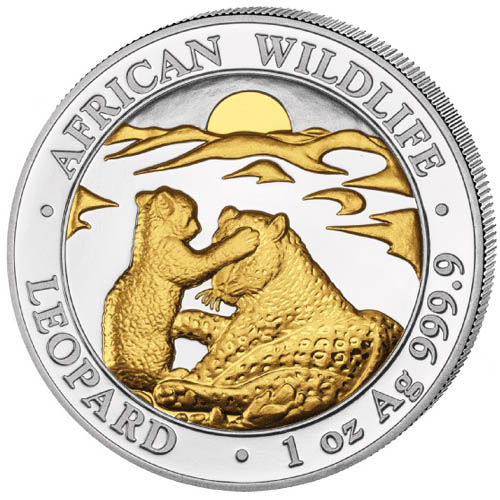 There are many similarities between the Silver Somalia African Wildlife Leopard Coin and its compatriot in the Silver Somalia Elephant collection. Both coins are available primarily as a 1 oz silver bullion coin with .9999 fine silver content. Similarly, both coins feature a new design on the reverse for the representative animal each year.

On the obverse of all 2019 1 oz Silver Somalia African Wildlife Leopard Coins is the image of the coat of arms for the Somali Republic. The crowned shield features a single star in the center and is supported on either side by leopards.

Leopards are one of the five species from the genus Panthera. The jaguar is its closest relative, but is much larger and has a different spot pattern than the leopard. Compared to other large cats, leopards have long bodies with short legs and larger skulls. Their natural range in Africa is largely limited to sub-Saharan Africa where it inhabits savanna and rainforest environments.

The reverse of 2019 1 oz Silver Somalia Leopard Coins includes the image of a mother leopard laying down with her young cub in front of her playfully swatting at her face. Leopards are solitary animals, but there is a close bond between mothers and cubs during the early months of life. The applied 24-karat gold is found only on the primary leopard design on this side of the coins.

2019 1 oz Silver Somalia African Wildlife Leopard Coins are available to you for purchase today in Brilliant Uncirculated condition. These coins feature what is known as a gilded finish, which refers to the thin layer of 24-karat gold on the leopards on the reverse.