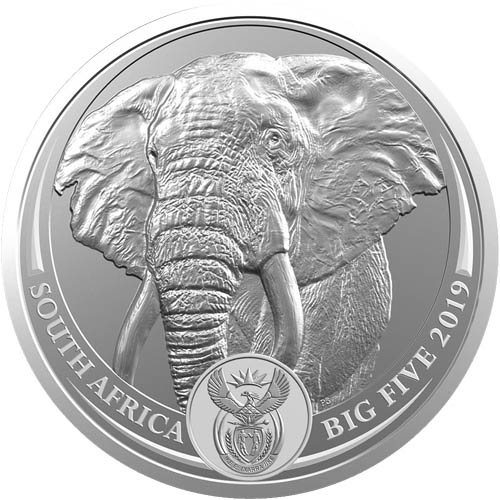 The African elephant is the largest living land mammal in the world today and is widely respected for its beauty and stature. Targeted by poachers for the ivory in its tusks, the African elephant has been on the decline even in the face of massive efforts to protect these beautiful creatures. This mighty beast is the launch design in the Big Five Series of silver coins for sale from the South African Mint in 2019. Now, 2019 1 oz Silver South African Big Five Elephant Coins are available to you for purchase online at Silver.com.

African elephants consist of a singular genus with two separate species. The African bush elephant is the largest land mammal in the world and largely inhabits the open plains and sparse savannahs of the African continent. The African forest elephant is the smallest of the three living elephant species in the world and is the third-largest land mammal behind the other two living elephant species. The bush elephant tends to inhabit humid forest regions on the African continent.

On the obverse side of 2019 Silver Big Five Elephant Coins is an image of a massive bull elephant with large tusks. This figure dominates the center of the design field and the coat of arms for South Africa is featured below it. This seal was recently adopted by South Africa in 2000 as part of its Freedom Day celebration and is capped by the secretary bird, a symbol that implies the rebirth of the nation of South Africa.

The reverse of 2019 1 oz Silver South African Elephant Coins features the image of two elephant heads. These heads are depicted in an extreme close-up, with the elephant on the right appearing slightly closer to the viewer as its ears eclipse portions of the head of the elephant on the left.

These 2019 1 oz Silver South African Big Five Elephant Coins are available to you for purchase inside of individual capsules and a beautiful blister pack. This multi-page blister pack includes details on the coin and information the African elephant, as well as images of the animals to be featured in the remainder of the series and a Certificate of Authenticity. All coins are in Brilliant Uncirculated condition.