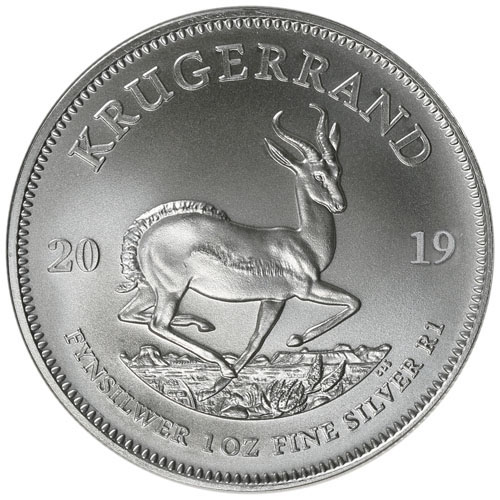 In 2017, the South African Mint and Rand Refinery introduced the first Krugerrand coin in a precious metal other than gold. The 2017 issue year marked the coin program’s 50th anniversary and featured both a silver and platinum coin to mark the occasion. The Silver Krugerrand was popular enough that the mint brought it into regular production. The 2019 1 oz Silver South African Krugerrand Coin is currently available to you for purchase online at Silver.com.

The first issue of the Silver Krugerrand in 2017 was a different coin than the newly-introduced bullion Silver Krugerrands. The coins issued in 2017 had a mintage cap in place and were meant to commemorate the 50th anniversary, which included the use of celebratory date marks on the coins. The South African Mint also specially treated the blanks during production for what it called a “Premium Uncirculated” coin.

In 2018, the Silver Krugerrand coin debuted as an annual-release silver bullion product. The new bullion coins have .999 fine silver content and feature the same obverse and reverse designs as the Gold Krugerrands. One major difference between gold and silver is the issuance of a supported face value on the silver coins. Each one has a value of 1 Rand that is engraved on the coin as “R1.”

On the obverse of 2019 1 oz Silver South African Krugerrand Coins is the image of Paul Kruger. Known as Oom Paul, or Uncle Paul, to his constituents, Kruger was an influential Boer figure in the late 19th century in both the military and political affairs of the new South African Republic. So influential was Kruger that his name was combined with the national currency, the Rand, to name the Gold Krugerrand when it debuted in 1967.

The reverse of 2019 Silver South African Krugerrand Coins features the Springbok antelope. The most common species of antelope on the continent, the Springbok is found throughout the nations of southern Africa and is the Republic of South Africa’s national symbol.

These 2019 1 oz Silver Krugerrands are all in Brilliant Uncirculated condition. The coins in this listing are offered to you housed in individual protective flips.