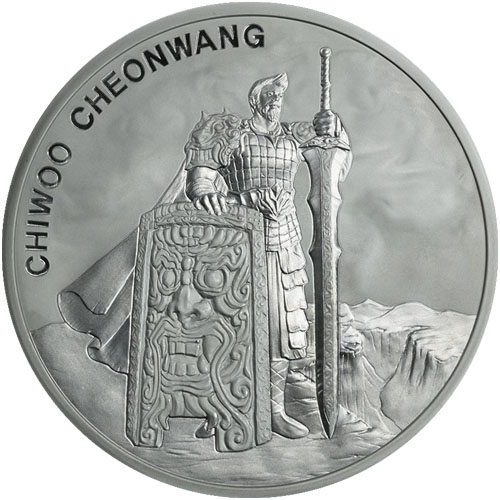 KOMSCO’s Chiwoo Cheonwang Series of gold and silver bullion medals has proven immensely popular with investors and collectors. The collection debuted in 2016 and bears a new design on the reverse side with each release. Today, 2019 1 oz Silver South Korean Chiwoo Cheonwang Medals are available to you online at Silver.com.

The Silver South Korean Chiwoo Cheonwang Series remains popular with investors each year. Mintage figures in the series have fallen since the debut, but remain much higher than their gold counterparts. The mintage cap in 2016 and 2017 was 50,000 medals. The 2018 medal had a mintage of 45,000, and this year offers an even lower figure at just 33,000 medals in total.

All of the 2019 1 oz Silver South Korean Chiwoo Cheonwang Medals in this product listing at Silver.com come to you in Brilliant Uncirculated condition. These medals are available individually inside of protective plastic flips, or you can purchase multiples inside of tubes containing a maximum of 25 medals or boxes of 250 medals packaged in 10 separate tubes.

The reverse of 2019 Silver South Korean Chiwoo Cheonwang Medals features the image of Chiwoo Cheonwang in a new, peaceful circumstance. The battle over and won, Chiwoo is depicted standing on a rocky plateau as he surveys the land in the aftermath of yet another victory. His shield rests at his side while his sword is set point down on the ground. He has even removed his helmet, clearly revealing the man behind the mythical abilities.

Chiwoo Cheonwang is regarded in Chinese and Korean culture as the leader of one of China’s founding tribes. It is said that his warriors never lost a battle over the course of 10 years of warfare. Beyond his legacy, mythical abilities have been attributed to his success, such as the ability to control the weather in battle and summon a dense fog to confuse his enemies.

On the obverse of 2019 1 oz Silver South Korean Chiwoo Cheonwang Medals is the image of Do ggae bi. This design featured on the battle shield of Chiwoo and is even said to possess the power to ward off evil spirits.

Please feel free to reach out to Silver.com with questions about these 1 oz silver products. You can call us at 888-989-7223, chat with us live online, or simply send us an email.