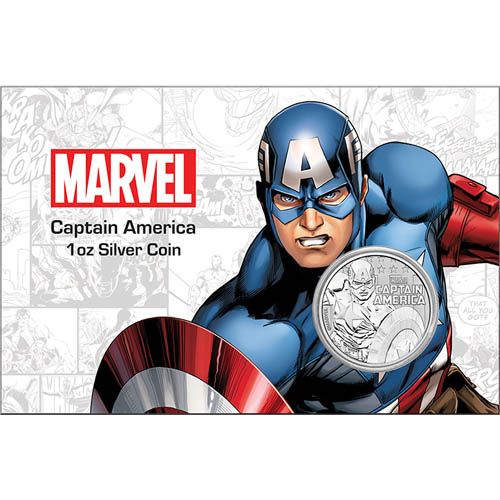 One of the oldest superheroes in American mainstream comics is Captain America. The alter ego of Steve Rogers, Captain America is a patriotic supersoldier who first appeared in Timely Comics during World War II and was often depicted fighting against the Axis powers. Though he experienced ebbs and flows in popularity, Captain America has enjoyed a resurgence in the 21st century alongside all Marvel Comics superheroes. Right now, 2019 1 oz Silver Tuvalu Captain America Marvel Series Coins are available to purchase online at Silver.com.

Each individual 2019 1 oz Silver Tuvalu Captain America Marvel Series Coin in this product listing comes in Brilliant Uncirculated condition. The coins are available to you with a limited-issue blister pack card. This card seals the coin in and includes full-color artwork of Captain America with his red-and-white shield on the obverse. On the reverse of the card are identifying details of the coin, including its mintage in the series and date mark.

Captain America was originally published by Timely Comics in March 1941, before America joined World War II. Throughout the remainder of the war and in the brief post-war period, Captain America was a popular comic. However, it was discontinued in 1950 and eventually revived in full by Marvel Comics in 1964, remaining in publication since that time.

On the reverse of 2019 1 oz Silver Tuvalu Captain America Marvel Series Coins is the alter ego of Steve Rogers, the supersoldier known as Captain America. He holds the distinction within the Marvel Universe as being the first comic character to appear outside of the comics when the 1944 movie Captain America was released in theaters. In the 21st century, actor Chris Evans has portrayed Captain America in 10 Marvel Cinematic Universe feature films since 2011.

The obverse of 2019 Silver Tuvalu Captain America Marvel Series Coins includes Queen Elizabeth II’s effigy. This particular design was created in 1998 for the Royal Mint of England by Ian Rank-Broadley and has been widely disseminated throughout the Commonwealth since that time. It featured on British coins until 2015, Australian coins until 2018, and is still in use on coins for Niue and Tuvalu.

If you have any questions about these silver bullion coins, please contact Silver.com. You can reach us at 888-989-7223, chat with us live online, or email us directly.