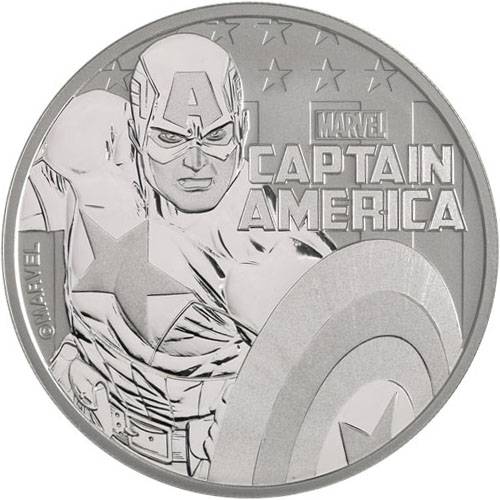 Captain America was a symbol of American democracy and pride during World War II. Debuting in 1941 from Timely Comics, the character of Captain America was actually shelved for nearly 15 years following the end of the war as his popularity waned. Today, the 2019 1 oz Silver Tuvalu Captain America Marvel Series Coin is available to you online at Silver.com.

In this listing today, the 2019 1 oz Silver Tuvalu Captain America Marvel Series Coins available to you come in Brilliant Uncirculated condition. The coins are housed within individual protective capsules, sealed rolls of 20 coins, or boxes with totals of either 100 coins or 300 coins. The 100 coin box has five rolls and the 300 coin box has 15 rolls.

On the reverse of 2019 Silver Tuvalu Captain America Coins is the image of the famed American superhero. Captain America was often depicted in original comics as a super soldier fighting for the United States and the Allies against the Axis powers during World War II.

The obverse of 2019 1 oz Silver Tuvalu Captain America Marvel Series Coins features the right-profile portrait of Queen Elizabeth II. In this portrait, Her Majesty is depicted by Ian Rank-Broadley in the popular fourth-generation design for the Royal Mint of England that was used on British coins from 1998 to 2016 and throughout Commonwealth nations through 2019 release dates in many cases.

The Perth Mint is the oldest operating mint facility in Australia and opened in 1899 as the third and final Royal Mint facility on the continent. Today, Perth Mint operates independent of the Royal Australian Mint and is owned by the state of Western Australia.

Please don’t hesitate to contact Silver.com with any questions as you shop our silver for sale. You can call us at 888-989-7223, chat with us live online, or simply email us.