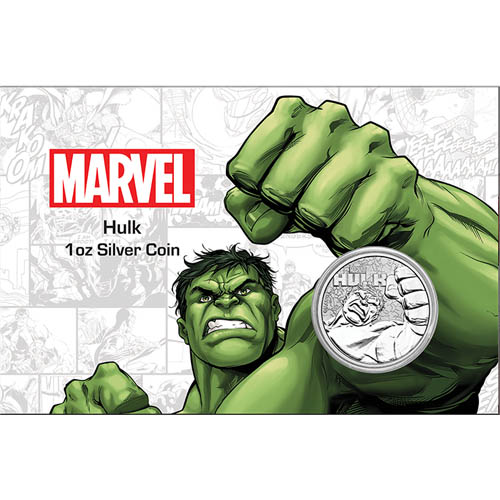 The Hulk represents one of the most conflicted and raw characters in Marvel Comics. The alter ego of scientist Bruce Banner, Hulk is a comic representation of Dr. Jekyll and Mr. Hyde. Banner and Hulk have little in common beyond the fellow heroes and some friends, but those relationships are often put to the test by each individual character’s desire for solitude. Today, 2019 1 oz Silver Tuvalu Hulk Marvel Series Coins are available to you for purchase online at Silver.com.

Dr. Robert Bruce Banner is a physically weak, socially withdrawn, and emotionally reserved individual. A scientist by trade, Banner was accidentally exposed to gamma rays during the dentation of an experimental bomb. The result of this exposure was the creation of the Hulk. Banner transforms into the Hulk when faced with overwhelming emotional stress.

When that stress unleashes the Hulk, the result is often a destructive rampage. Often depicted as an incredibly powerful beast, the level of strength assigned to the Hulk at any given time seems to be attached to his level of rage.

All 2019 1 oz Silver Tuvalu Hulk Marvel Series Coins are now available in a limited-issue blister pack card. This card includes the green beast in his full glory on the obverse with artwork from the comics. The reverse of the card includes the coin’s date mark and mintage information, along with other identifiers. Each one is in Brilliant Uncirculated condition.

On the reverse of 2019 Silver Tuvalu Hulk Marvel Series Coins is a depiction of the Hulk delivering his trademark blow, the Hulk smash. The fits of rage that lead to Hulk’s rampages tend to create such chaos and devastation that there is an inevitable blowback in society that falls on Dr. Banner.

The obverse of 2019 1 oz Silver Tuvalu Hulk Marvel Series Coins bears the portrait of Queen Elizabeth II. This right-profile effigy of Her Majesty was created in 1998 by Ian Rank-Broadley for the Royal Mint of England. This portrait featured on British coins from 1998 to 2015, Australian coins from the Perth Mint between 1998 and 2018, and is still popular on coins from Niue and Tuvalu.

Please feel free to contact Silver.com with questions about buying silver. You can call us at 888-989-7223, chat with us live online, or email us.