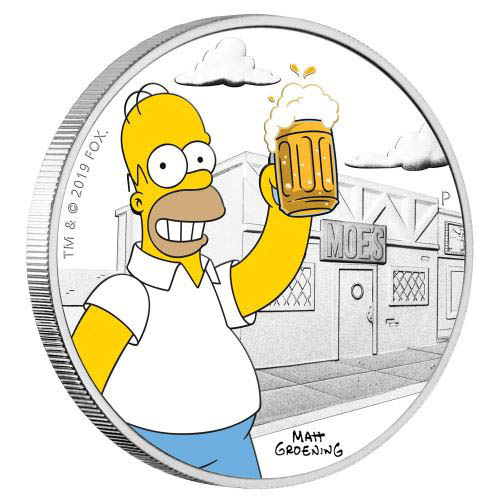 In 2018, The Simpsons became the longest-running scripted TV series in American history. Though it debuted on TV in 1987, it didn’t earn its own half-hour series until 1989. This makes 2019 the 30th anniversary of the series and the Perth Mint is celebrating with a five-coin character collection. The 2019 1 oz Silver Tuvalu The Simpsons Homer Proof Coin is currently available to you for purchase online at Silver.com.

The Simpsons started off simply enough. The 30-second shorts featuring the animated family first appeared on The Tracy Ullman Show in 1987, but by 1989 the fan following for the show had proven it had the legs to stand on its own. In that year, The Simpsons debuted on American television with a half-hour time slot to fill.

Over the course of the last 30 years, The Simpsons has garnered such popularity that it is now viewable in countless countries around the world and in various languages. In fact, The Simpsons is now featured on TV in 60 different countries and has been translated into 20 different languages during its 30-year run.

The reverse side of 2019 1 oz Silver Tuvalu The Simpsons Homer Proof Coins includes the colorized image of Homer Simpson as the primary design element. Homer is featured in the foreground raising a glass of his favorite brew in front of his preferred watering hole. Moe’s Tavern is where Homer spends many of his nights and here you’ll find him raising a glass of Duff in your name. Homer is featured wearing his trademark white shirt and blue pants.

On the obverse of 2019 Silver Tuvalu The Simpsons Homer Proof Coins is an effigy of Queen Elizabeth II. Her Majesty is featured here in right-profile relief in what is considered the most elegant portrait of the Queen during her very long reign as Queen of England. The effigy was created in 1998 by Ian Rank-Broadley for the Royal Mint of England.

These 2019 1 oz Silver Tuvalu The Simpsons Homer Proof Coins feature officially licensed images from The Simpsons and Twentieth Century Fox Film Corporation. Each coin is individually housed in an acrylic capsule that enables you to see both design elements without removing the coins from their case. The coins each come with an individually numbered Certificate of Authenticity.

We encourage Silver.com customers to call us at 888-989-7223 with questions when buying silver. You can also reach out to us online using our live chat and email address features.