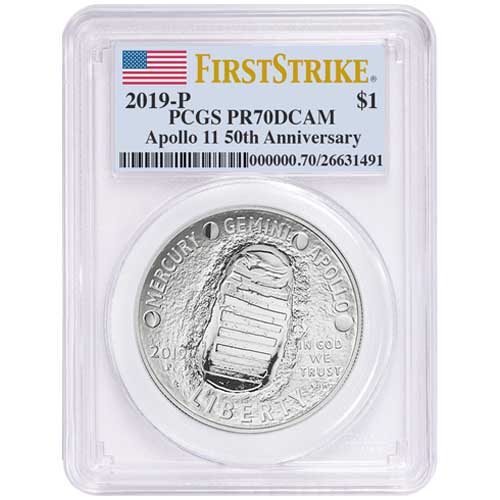 The United States Mint’s silver for sale in the Apollo 11 commemorative series includes a number of silver dollars. In all, the collection offers three silver dollars and two silver clad half-dollar coins. Today, 2019 $1 Proof Silver American Apollo 11 50th Anniversary Coins are available to you online at Silver.com in perfect condition.

NASA achieved its decade-long goal in 1969 of sending a man to the moon and returning him to the surface of Earth. President John F. Kennedy set the national goal for America to overcome the Soviet Union’s launch of Sputnik in 1959 by becoming the first nation to send a human to another celestial body and return that individual to Earth. This was accomplished with the Apollo 11 mission.

All 2019 $1 Proof Silver American Apollo 11 50th Anniversary Coins in this listing are perfect proof specimens. The coins earned a PR70 certification that indicates the presence of full, original mint luster and no detracting flaws. First Strike labels included in the slab indicate the PCGS received the coins for grading within the first 30 days of their release by the US Mint.

The coins in the Silver American Apollo 11 50th Anniversary release are domed products. The obverse field of each coin is concave with a sunken design, while the reverse is convex with a domed appearance that perfectly depicts the appearance of an astronaut helmet and visor.

Please don’t hesitate to reach out to Silver.com if you have any questions. Our customer service team is available to you at 888-989-7223, online through our live chat, and via our email address.