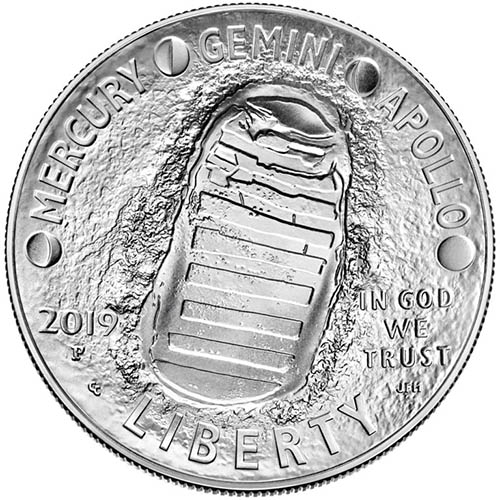 The summer of 2019 marks the 50th anniversary of NASA’s successful Apollo 11 mission. The goal of the mission was to fulfill President John F. Kennedy’s promise in 1961 to send a man to the moon and return him safely to Earth before the end of the decade. Right now, 2019 1 oz Proof Silver American Apollo 11 50th Anniversary Coins are available to purchase online at Silver.com.

2019 1 oz Proof Silver American Apollo 11 50th Anniversary Coins are offered by the United States Mint inside of protective capsules and a US Mint commemorative display box. Each coin comes with a Certificate of Authenticity and the mint mark of the Philadelphia Mint, with a “P” struck on the obverse side.

The Silver Apollo 11 50th Anniversary Coins include a 1 oz bullion coin and 5 oz proof coin in addition to these 1 oz proof coins. The proof silver coins for sale in the series have frosted designs and mirrored background fields. The two 1 oz silver coins have a total mintage of 400,000 across the release and are accompanied in this 50th-anniversary issue by two gold coins.

On the obverse side of all Proof Silver American Apollo 11 50th Anniversary Coins is the image of an astronaut’s footprint on the surface of the moon. Engravings on this side include “Mercury, Gemini, Apollo,” the national motto “In God We Trust,” “2019,” and “Liberty.” The design field includes four different phases of the moon along the top rim of the obverse surface.

The reverse of 2019 1 oz Proof Silver American Apollo 11 50th Anniversary Coins features a close-up image of Buzz Aldrin’s helmet and visor. Aldrin snapped a famous photo close to his visor that captures the image of Neil Armstrong and the Eagle lunar lander reflected in the field of view.

Apollo 11 was the first manned mission to put human beings on another celestial body. The mission lasted more than eight days. The crew lifted off from Merritt Island, Florida, on July 16, 1969, and splashed down in the Pacific Ocean on July 24, 1969.