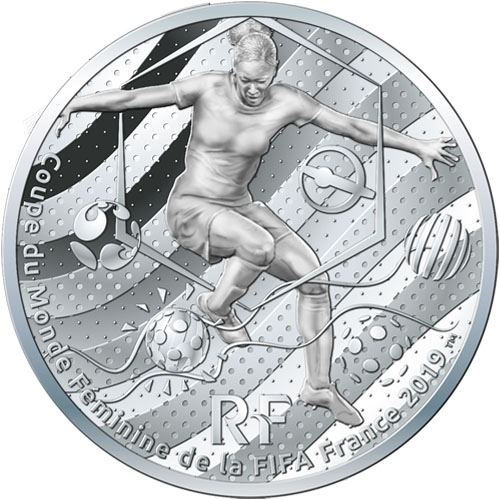 Each sport has its own unique means of moving the ball or puck up and down the field of play. Baseball has the least amount of direct contact with the ball among all players, while soccer and hockey involve each person getting a touch as players work as a team to move the ball or puck toward the opposing goal. The dribbling design in the FIFA Women’s World Cup release highlights the use of one’s feet in this sport. The 2019 10 Euro Silver FIFA Women’s World Cup Dribbling Proof Coin is currently available to you for purchase online at Silver.com.

On the obverse side of 2019 Silver FIFA Women’s World Cup Coins is the image of the World Cup trophy awarded to the winner of the women’s tournament. The national flags to the right-hand side represent the nations that have hoisted that trophy so far since the tournament debuted in 1991.

The reverse face of 2019 10 Euro Silver FIFA Women’s World Cup Dribbling Coins includes the image of a player dribbling the ball down the field. Soccer is known to the rest of the world as football because players are only allowed to move the ball up and down the field with their feet by dribbling.