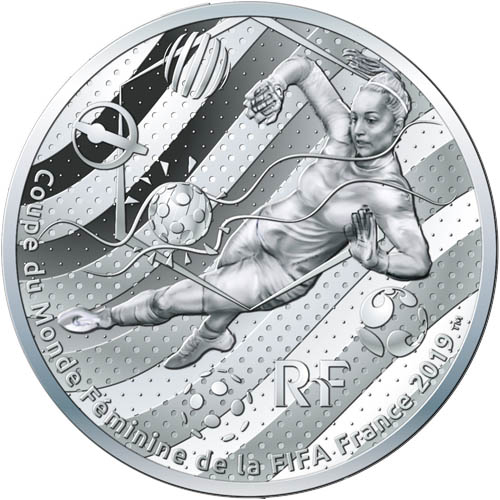 Any quantity available for $77.13 per coin over spot!

The 2019 FIFA Women’s World Cup is hosted by the nation of France, the first time the country has played host and the third time a European nation has hosted the women’s tournament. The United States enters the tournament as the defending champions and a new series of proof silver and gold coins is available to mark the occasion of the tournament. Today, 2019 10 Euro Silver FIFA Women’s World Cup Goalkeeper Proof Coins are available to you online at Silver.com.

All 2019 10 Euro Silver FIFA Women’s World Cup Goalkeeper Proof Coins in this listing come with an individual protective capsule. If you’d like to upgrade the presentation and protection for your coin, commemorative single-coin boxes and 4-coin box sets are also available that have Women’s World Cup themes.

The United States has the most victories in the World Cup, laying claim to three titles overall. Germany is next with two titles earned back-to-back in the early 2000s, and Norway and Japan each have one title.

For the reverse of the 2019 10 Euro Silver FIFA Women’s World Cup Proof Coins, the mint uses the image of a goalkeeper diving to make a stop. Goalies are unique in soccer in that they are the only individuals allowed to use their hands on the field of play. That use is limited to an 18-yard box around their goal, however.

Please feel free to reach out to Silver.com if you have questions. You can call us at 888-989-7223, chat with us live online, or email us directly.