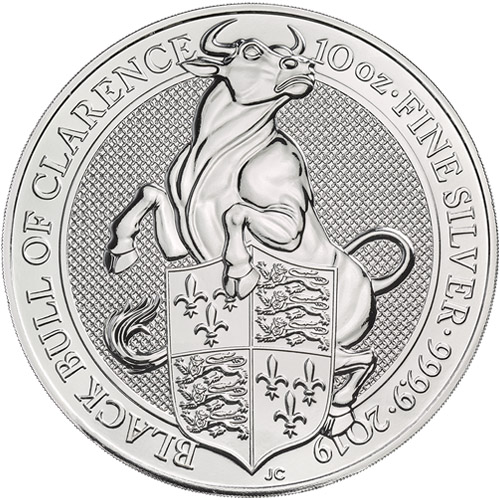 The silver coins for sale in the Royal Mint’s Queen’s Beast Series come in variety of versions and weights. The coins are available in two bullion weights and four proof weights. The largest bullion version of the coin is the 10 oz silver coin. The 2019 10 oz Silver British Queen’s Beast Black Bull of Clarence Coin is currently available to you for purchase online at Silver.com.

The Black Bull of Clarence comes to the royal arms of Queen Elizabeth II through King Edward IV, the first king from the House of York. Edward IV’s reign came during the Wars of the Roses as the House of York went to war with the ruling House of Lancaster, whose leader was King Henry VI.

On the obverse of 2019 10 oz Silver British Queen’s Beast Black Bull Coins is the effigy of Queen Elizabeth II. Her Majesty is featured here in a fifth-generation portrait created in 2015 by Jody Clark. This right-profile effigy shows the Queen wearing the Royal Diadem crown and captures her at the age of 89.

The reverse side of the 2019 Silver British Queen’s Beast Black Bull Coin includes the imposing design of the Black Bull. Used by Edward IV, his great-grandfather Roger Mortimer, and his brother Richard III, the Black Bull guards the quartered shield with the three lilies of France in two quadrants and the three lions of England in the other two quadrants.

Edward IV ruled England from 1461 to 1470 and was briefly removed from the throne by a resurgent King Henry VI who returned from exile in Scotland to remove Edward IV. Henry VI’s second reign was short though, as he was defeated in battle by the forces of Edward IV in 1471, imprisoned in the Tower of London, and eventually killed as Edward IV resumed his reign.

These 2019 10 oz Silver British Queen’s Beast Black Bull Coins are available to you in Brilliant Uncirculated condition. The coins are housed in protective plastic capsules and available as part of the wider Queen’s Beast range.

We encourage Silver.com customers to call us with questions at 888-989-7223. You can also connect with us online through our live chat and email address options.