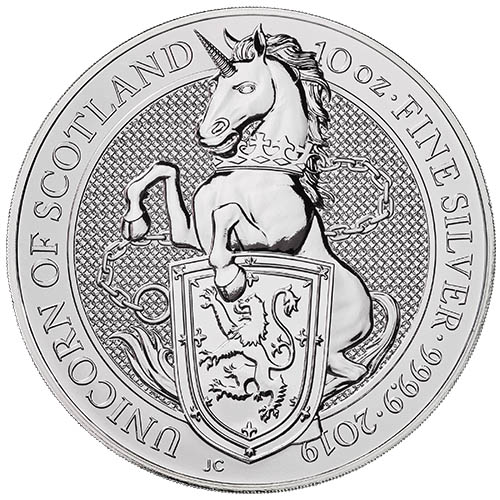 The British Queen’s Beast Series of bullion coins offers variety to investors and collectors alike. The 10-design collection is ideal for those who collect silver for its value and the beauty of designs, while the range of bullion coins offers a solid investment option. The 2019 10 oz Silver British Queen’s Beast Unicorn of Scotland coin is currently available to you for purchase online at Silver.com.

The Unicorn of Scotland is one of the more important beasts in the heraldry of the Royal Arms of England, not only because it is prominent in the British coat of arms, but because it symbolizes the union of two different crowns that for centuries were opposing forces. When King James I ascended to the throne of England, the man who was then King of Scotland was able to unify the two crowns into one kingdom and combined the royal arms of the two.

James I would use the Unicorn of Scotland and the Lion of England to support his shield in heraldic designs, but the one featured in the Queen’s Beast Collection is representative primarily of Scottish heraldry. The unicorn here supports the shield of Alexander III, King of the Scots in the 13th century.

On the reverse side of 2019 10 oz Silver British Queen’s Beast Unicorn of Scotland Coins, you’ll find the image of a large, powerful unicorn standing behind the royal shield of Alexander III. Unchanged since his rule, this shield representing Scotland includes a singular lion in the rampant pose. The rampant pose is the most powerful and aggressive in heraldry.

The obverse of 2019 10 oz Silver British Queen’s Beast Unicorn Coins features the effigy of Queen Elizabeth II. Her Majesty is depicted here in right-profile relief in the fifth-generation design to appear during her reign which began in 1952.

These 2019 10 oz Silver British Queen’s Beast Unicorn of Scotland Coins are available to you inside of protective plastic capsules. Each coin is in Brilliant Uncirculated condition and comes with the new guilloche background element implemented on coinage starting in 2016.