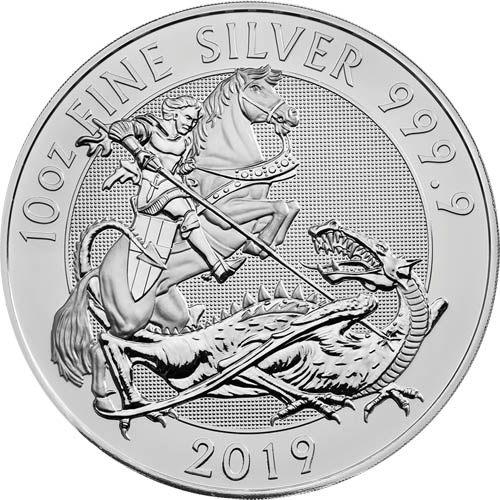 St. George is the patron saint of England and his cross shield features prominently in the national flag of England, as well as the Union Flag of the United Kingdom. His figure has appeared on gold sovereigns since the early 19th century and now features on a beautiful silver bullion coin introduced by the Royal Mint in 2018. The 2019 10 oz Silver British Valiant Coin is currently available to you for purchase online at Silver.com.

While St. George is held in high regard today by many modern nations as a patron saint, his history far predates many of these national entities as we know them. St. George was a soldier in the Roman Praetorian Guard for the emperor Diocletian. Believed to be of Palestinian and Greek heritage, the real-life George was sentenced to death for refusing to recant his Christian faith in 303 AD.

Venerated in both Western Christian societies and the Muslim world, the most popular story associated with St. George comes from 11th-century texts from modern-day Georgia that describe his epic battle against a dragon. In the legend, a dragon demands human sacrifices from a local populace. None of the men of the village are able to slay the dragon, but George rides to the rescue to tame and eventually slay the dragon.

On the reverse of 2019 10 oz Silver British Valiant Coins is the image of St. George in his armor and riding on horseback as he levels his spear into the neck of the ferocious beast. His personal shield with cross, the inspiration for England’s national flag, is visible attached at this side on the horse.

The obverse of 2019 10 oz British Valiant Coins includes the fifth-generation portrait of Queen Elizabeth II on British coins. This right-profile portrait was created in 2015 by Jody Clark for the Royal Mint of England. Here, the Queen is depicted at the age of 89 wearing the Royal Diadem crown on her head. Both sides of the coin have the Royal Mint’s new guilloche background element. This light-reflecting element resembles braided rope in appearance.