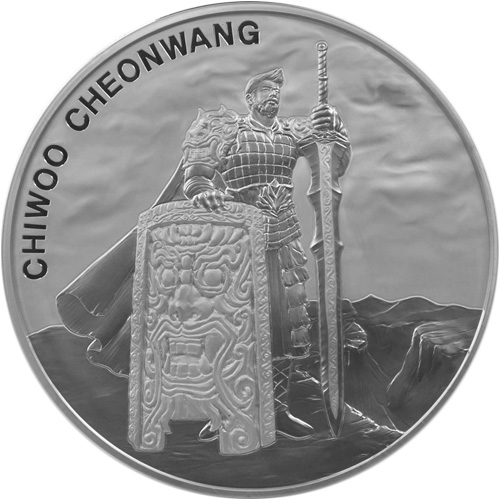 The designs in the Chiwoo Cheonwang Series are more than just a collection of new designs each year. KOMSCO changes the designs with a purpose in mind for each year. The goal is to present the famed God of War from Korean culture throughout his process to prepare for and head into battle.

For example, the debut design in 2016 depicted Chiwoo just after he put on his full complement of battle armor. In the 2017 release, he is depicted mounted on his horse and prepared to ride off into battle. 2018 depicted him in the thick of the action as he sought to strike down his enemies. The 2019 design showcases Chiwoo in the aftermath of the battle.

The reverse side of 2019 10 oz Silver South Korean Chiwoo Cheonwang Medals comes with a fresh depiction of Chiwoo Cheonwang. Here, he is featured standing on the battlefield as he surveys the aftermath. Chiwoo is said to have gone 10 years in battle without losing a fight and he no doubt is surveying yet another win in this design field.

KOMSCO is the official sovereign mint of South Korea. Founded by the Republic of Korea in 1951, the Korea Minting and Security Printing Corporation is owned by the government and provides not only coinage and banknote production, but also government paperwork and passports.

We encourage Silver.com customers to call us with questions at 888-989-7223. You can also connect to us online through our live chat and email address features.