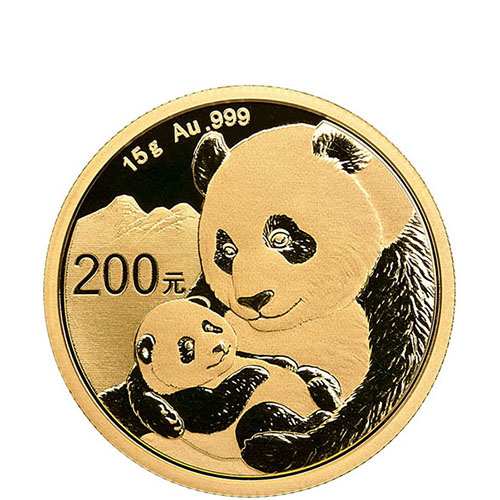 The Gold Chinese Panda Coin series from the Chinese Mint debuted in 1982 with coins available in Troy ounces. These initial issues include a 1 oz gold coin with four fractional weights, and a fifth fractional weight was added to the collection one year later. Now, these five coins are issued by the Chinese Mint in Grams rather than Troy ounces, but remain a must-have for investors. The 2019 15 Gram Gold Chinese Panda Coin is currently available to you for purchase online at Silver.com.

In 1982, the Gold Panda Coins debuted with a 1 oz, 1/2 oz, 1/4 oz, and 1/10 oz coin available to gold bullion buyers. In 1983, the Chinese Mint issued a 1/20 oz coin to join the others. All five coins have been issued in the years since that time, with only a few major changes coming. In 2001, the Chinese Mint adjusted the face value of these gold coins upward, but the more noticeable change came in 2016.

Starting in 2016, the Chinese Mint changed all of its gold and silver coins in the Chinese Panda Series to weights in Grams rather than Troy ounces. The move is said to have occurred to bring the program in line with the nation’s use of the Metric system and resulted in slight adjustments in the actual weight in Troy ounces and the diameter of most coins.

On the obverse of 2019 15 Gram Gold Chinese Panda coins is the image of the building known as the Hall of Prayer for Abundant Harvests. This structure is located within the Temple of Heaven complex and is one of the many buildings constructed here in Beijing between 1406 and 1420.

The reverse of 2019 Gold Chinese Panda Coins includes a unique Giant Panda design found only on 2019 date marked coins. The Giant Panda is a well-known bear species found natively in Chine and is easily identified by its white-and-black fur patches.

These 2019 15 Gram Gold Chinese Pandas are in Brilliant Uncirculated condition. The coins are available in either individual protective packaging or sheets of 10 coins.

We encourage Silver.com customers to call us with questions at 888-989-7223. You can also connect with us live online or simply send us an email with your inquiries.