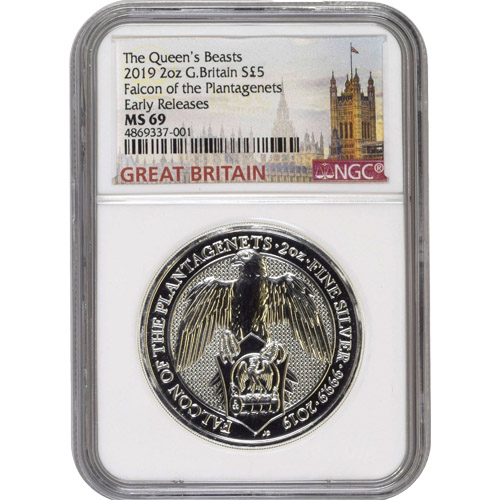 The coins of the Queen’s Beast Series are highly coveted by investors and collectors alike. This collection of silver for sale comes in two different bullion weights and four proof weights, but the primary bullion option is the Royal Mint’s first-ever 2 oz silver bullion coin. Today, 2019 2 oz Silver British Queen’s Beast Falcon of the Plantagenets Coins are available to you online at Silver.com in near-perfect condition.

All 2019 2 oz Silver British Queen’s Beast Falcon of the Plantagenets Coins are available in this listing in near-perfect condition. Coins with a Mint State 69 certification showcase full, original mint luster along with a maximum of two minor detracting flaws. The coins in this condition may feature minuscule contact marks or hairlines found only outside of the primary focal areas of the coin.

Included in the slab from the NGC is an Early Release label. The ER label indicates the coins were received by the NGC for certification within 30 days of their initial release from the Royal Mint of England.

On the obverse of 2019 2 oz Silver British Queen’s Beast Coins is the image of Queen Elizabeth II. England’s longest-reigning monarch appears in this design in right-profile relief in the fifth-generation design created in 2015 by Jody Clark.

The reverse face of 2019 2 oz Silver British Queen’s Beast Falcon Coins features the white falcon of Edward III. A fan of hawking, Edward III chose the white falcon for his personal seal and depicted it clutching an open fetterlock as a sign of his legitimate claim to the throne.

Please feel free to contact Silver.com with your questions. You can call us on the phone at 888-989-7223, chat with us live online, or simply send us an email with your inquiries.