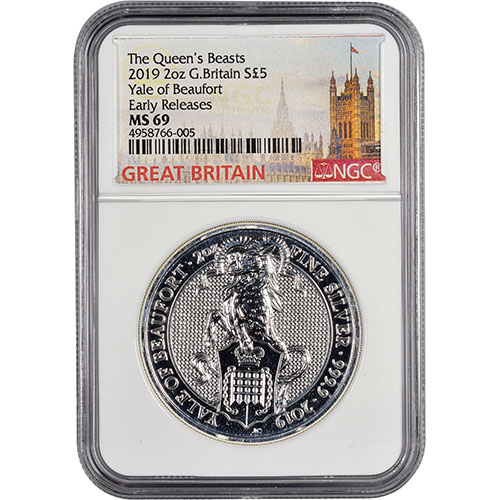 The coins in the Queen’s Beast Series from the Royal Mint of England offer 10 exciting heraldic beast designs that stretch back over more than 900 years of British royal history. The Yale of Beaufort is among the many designs in this collection and comes from the late Medieval Age in England. Right now, 2019 2 oz Silver British Queen’s Beast Yale of Beaufort coins are available to purchase online in near-perfect condition at Silver.com.

Each 2019 2 oz Silver British Queen’s Beast Yale of Beaufort Coin available for you to purchase today comes in near-perfect condition. Mint State 69 coins exhibit full, original mint luster and a maximum of two minor detracting flaws. Examples of acceptable flaws at this certification level include only minuscule contact marks and hairlines found outside the primary focal areas of the coin.

The included Early Release label that comes with these specimens indicates the timing of their arrival for certification. To qualify as an Early Release specimen, coins must be received by the NGC within the first 30 days of their original release date from the Royal Mint of England.

On the reverse of 2019 2 oz Silver British Queen’s Beast Yale Coins is the image of Lady Margaret Beaufort’s shield and heraldic beast. The Yale is a goat- or antelope-like creature with horns on its head and the tusks of a boar on its snout. This Yale reflects strength and determination with its long, twisted horns and aggressive appearance. The shield it supports is that of Lady Margaret Beaufort.

Lady Margaret was the sole heiress of John Beaufort, Duke of Somerset. Her second marriage produced her only child, a son who would become King Henry VII. Henry VII is the founder of the House of Tudor that ruled England from 1485 until 1603.

The obverse of 2019 2 oz Silver British Yale of Beaufort Coins includes the image of Queen Elizabeth II. This right-profile image is the fifth-generation design used on British coins and was created in 2015 by Jody Clark.

If you have any questions, please contact Silver.com. You can call us at 888-989-7223, chat with us live online, or email us directly. Don’t forget to check out the latest silver prices online using our charts!