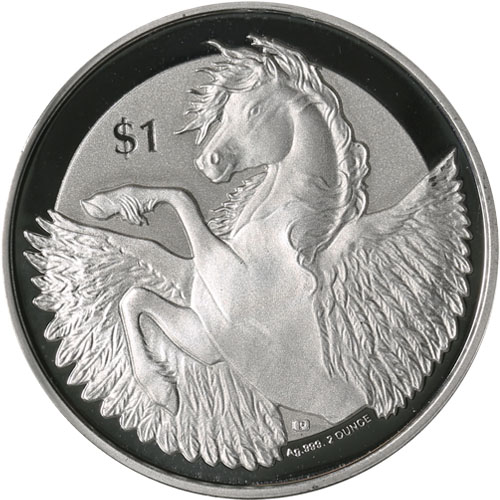 There are many fearsome and gruesome beasts still talked about today from Ancient Greek mythology, but only one animal from that era of human civilization is viewed with reverence and kindness. The Pegasus, winged horse associated with divine intervention or the journey to heaven, is the inspiration for a series of British Virgin Islands silver for sale from the Pobjoy Mint. Now, 2019 2 oz Silver British Virgin Islands Reverse Frosted Pegasus Coins are available to you for purchase online at Silver.com.

The Silver Reverse Frosted Pegasus coins debuted for the British Virgin Islands in 2017. The coins have been issued in three separate years to this point with two different designs. The 2019 issue marks the second time that weights other than the 1 oz version were available and the reuse of the 2018 design. This 2 oz coin is again joined by a larger 5 oz coin in the 2019 release.

Mintage figures in the series drop significantly from the 1 oz coin to its larger counterparts. While the former has a 2019 mintage of 50,000 coins, these 2 oz coins come with only 5,000 available in total. The 5 oz coin has the lowest mintage among the three options at just 1,000 coins released.

On the reverse of 2019 2 oz Silver British Virgin Islands Reverse Frosted Pegasus Coin is the image of the winged horse. It is depicted rearing up onto its hind legs and raising its front legs in the air. The powerful wings that allow it to take flight are spread to their greatest extent behind the creature’s back.

The origins of the Pegasus lie in the demi-god Perseus’ defeat of the Gorgon known as Medusa. Perseus, the son of Zeus and a mortal woman mother, was gifted several tools to help him defeat Medusa. Chief among them was a shield with a mirrored surface so he could locate the beast without looking her in the eyes and turning to stone. When he struck down Medusa and cut off her head, the Pegasus was said to have been born out of her blood.

For the obverse of 2019 Silver BVI Reverse Frosted Pegasus Coins, the Pobjoy Mint uses its own unique portrait of Queen Elizabeth II. This right-profile design showcase the Queen’s head, neckline, and shoulders as she wears the Royal Diadem crown.