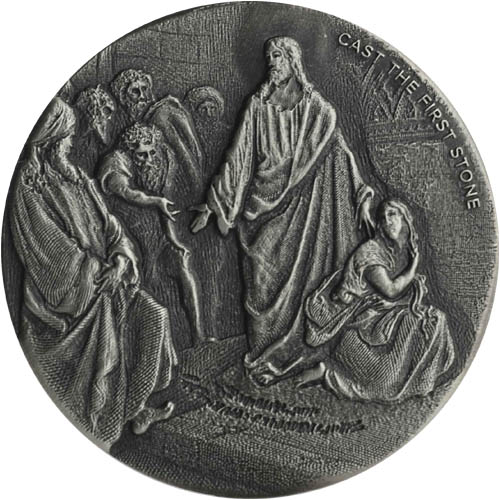 The Scottsdale Mint introduced the Silver Biblical Series in 2015 with designs based on works of art from Gustave Dore. The collection offers numerous new silver coin designs each year and the 2019 series closes in on 30 total designs. The 2019 2 oz Silver Cast the First Stone Biblical Coin is now available to you for purchase online at Silver.com.

The Silver Biblical Series from the Scottsdale Mint catalogs some of the most famous passages from the Christian Bible as envisioned by Gustave Dore. The French artist was a printmaker, illustrator and sculptor who created the illustrations for the Bible series in 1866. His designs were featured in a major exhibition of work in London in 1867.

In the fourth release of 2019, the 28th design in the overall series focuses on the tale from the Book of John. A woman had been accused of adultery and the Pharisees had interrupted a teaching session of Jesus to bring her case to his attention. The Pharisees were pushing for the woman to face justice under Mosaic Law.

On the reverse of 2019 2 oz Silver Cast the First Stone Biblical Coin is the image of Jesus challenging the Pharisees. Mosaic Law dictated that the woman be stoned to death for committing adultery. The Pharisees were challenging Jesus in hopes of getting him to make a mistake in his own viewpoint or judgment. Instead, he stood firm and said that if Mosaic Law was to be followed, let those with no sins of their own step forward to stone the woman.

The obverse of all Silver Cast the First Stone Biblical Coins includes the portrait of Queen Elizabeth II. In this right-profile portrait, Her Majesty wears the George VI State Diadem Crown. This crown is worn for the State Opening of Parliament and features 1,333 diamonds and was fashioned in 1820.

All of these 2019 2 oz Silver Cast the First Stone Biblical Coin Series products come with laser-etched individual serial numbers on the edges and a matching Certificate of Authenticity with the serial number and passage from the Bible depicted in the reverse design. The coins ship with a Bible-themed display case.

We encourage Silver.com customers to call us with questions at 888-989-7223. You can also reach us on the web through our live chat and email address.