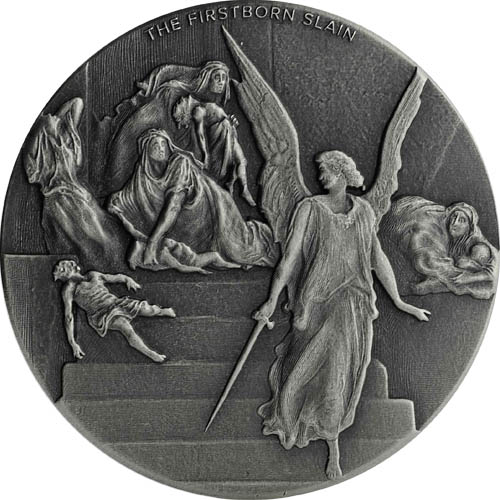 Each of the coins in the Scottsdale Mint’s Silver Biblical Coin Series is expertly designed and meticulously crafted. The 2 oz silver coins in this collection are struck on rimless blanks with an antique polish and individually assigned serial numbers. The third release of the 2019 design schedule focuses on the plague which took the firstborn sons of Egypt. Right now, 2 oz Silver First Born Slain Biblical Series Coins are available to purchase online at Silver.com.

Each of the 2019 2 oz Silver First Born Slain Biblical Series Coins in this product listing comes to you with a protective presentation box meant to reflect the appearance of the Bible. The coins in this collection have individual serial numbers engraved on to the edges of the coins and come with a Certificate of Authenticity that reflects that same serial number. Each of these antique coins has a polish that delivers a brushed, ancient matte appearance to the coins.

The Silver Biblical Coin Series includes six new designs with each product release year dating back to the 2015 debut of the collection. As the third release in the 2019 collection, the Silver First Born Slain Coins mark the 27th release overall in this robust offering.

On the reverse side of 2019 2 oz Silver First Born Slain Biblical Series Coins is the depiction of a scene that might have played out in Biblical times as the firstborn sons of Egypt were taken from their families. As punishment for the continued enslavement of the Jewish people, God sent one of his angels to take the lives of all the firstborn, from the Pharaoh’s young son to those of servants in the royal household. Even the firstborn of Egyptian livestock were dead the next morning. The only children to survive were the firstborn of the Jewish slaves as those families had marked their homes with blood over the door.

The obverse of 2019 2 oz Silver First Born Slain Biblical Series Coins includes an effigy of Queen Elizabeth II. Her Majesty’s effigy as featured here was used on British coins from 1985 to 1997 and was created by Raphael Maklouf. This third-generation portrait captures the Queen wearing the Royal Diadem crown and was the first of her reign to include earrings and a necklace in the portrait.

If you have any questions about these silver coins, please contact Silver.com. Our customer service team is available to you at 888-989-7223, online using our live chat, and via our email address.