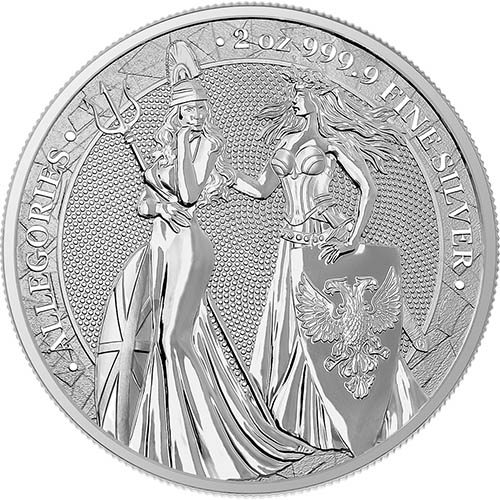 An allegory is a literary device in which a character or fictional figure is used to present a broader message or represent a place or group. When it comes to the latter definition, female personifications became common throughout Europe as a representative of nations. Popular examples include Britannia and Germania, both of whom appear on a silver bullion product for the first time ever in a series from Germania Mint. The 2019 2 oz Silver Germania Allegories Britannia & Germania Round is now available to you for purchase online at Silver.com.

Britannia and Germania have histories in their respective nations that go back nearly 2,000 years. Both of the names come from the Latin language of the Roman Empire and were terms used by the Romans when the empire conquered modern Germany and Britain. With the fall of the Roman Empire, both regions eventually reclaimed the term as a representative of the people and the nations.

Britannia first featured on British coinage in the late 1700s, with Germania’s popularity rising among Germans during the Revolutions of 1848 that swept across Europe and resulted in the formation of the German Empire. Both female personifications are typically depicted in aggressive stances as a representative of national strength and pride. These silver rounds strike a toned down vision for both.

On the obverse side of 2019 2 oz Silver Germania Allegories Britannia & Germania Rounds, both figures are depicted with their shields at their sides. Britannia’s trident rests on the ground and leans into her right hand while Germania’s sword remains in its scabbard. As Britannia stands on the left, Germania is on the right and extends an arm toward her counterpart.

These 2019 2 oz Silver Germania Allegories Britannia & Germania Rounds are available to you with a protective plastic capsule. The Germania Mint also offers the silver rounds with a Certificate of Authenticity.

We encourage Silver.com customers to reach out to us with questions at 888-989-7223. You can also connect with us online using our live chat or simply send us an email.