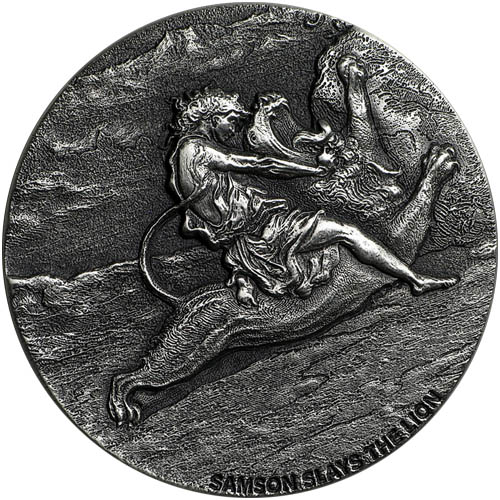 The Scottsdale Mint’s Biblical Silver Coin Series is a true collectible masterpiece. This extensive collection debuted in 2015 and offers collectors five designs in each release year. The series captures the biblical artworks of 19th century French painter Gustave Dore on the reverse side of the coins. Right now, the 2019 2 oz Silver Samson Slays the Lion Biblical Coin is available to purchase online at Silver.com.

Each of the 2019 2 oz Silver Samson Slays the Lion Biblical Coins in this listing comes to you with a protective bible-themed box. The box includes the passage from Judges in the Bible in which Samson’s feat of slaying the lion is described. Each coin comes with an individual serial number laser-etched on the edge and a matching Certificate of Authenticity with that same number printed on it.

Samson is famed for his superhuman strength, the source of which is rumored to be his long hair. He is the last of the Judges of Ancient Israel and his power may lie in his hair, but it was given to him by God as a sign of the power of the Spirit of the Lord. Samson was given the ability to slay a lion, which he did with his bare hands, as a result of God’s power.

On the reverse of 2019 2 oz Silver Samson Slays the Lion Biblical Coins is the image of Samson on the back of the lion as he tries to kill the beast. In the Bible, it is told that Samson tore the lion apart by first ripping its head in two at the jaw. Other impressive feats completed by Samson include defeating an entire Philistine army with only a donkey’s jaw bone as his weapon.

The obverse of 2019 Silver Samson Slays the Lion Biblical Coins contains the right-profile portrait of Queen Elizabeth II. This is the third-generation effigy of Her Majesty created in 1984 by Raphael Maklouf and featured on British coinage through 1997.

If you have any questions about buying silver, please contact Silver.com. You can call us on the phone at 888-989-7223, chat with us live online, or simply send us an email.