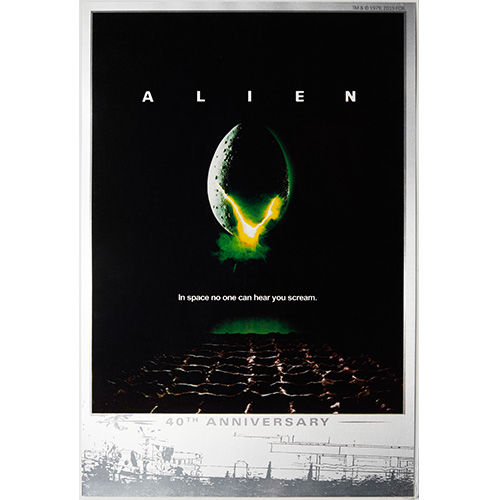 Any quantity available for $75.37 per piece over spot!

For the first time in its history, the Perth Mint is issuing a silver foil for investors and collectors. This new piece of silver for sale recreates the image from the theatrical poster issued with the debut of the feature film Alien in 1979. 2019 is the 40th anniversary of the film’s release and the silver foils were released in 2019 right around the same time the feature film hit theaters 40 years ago. Today, 2019 35 Gram Silver Australian Alien 40th Anniversary Foils are available to you online at Silver.com.

Alien was first released on May 25, 1979, in a limited release and gained widespread release in the United States on June 22, 1979. The film featured on the crew of a commercial space tug that encountered an unexpected alien with a particularly violent streak. The aggressive extraterrestrial wreaked havoc on the crew of the tug after it was let loose. The film has been honored by the Library of Congress with preservation in the United States National Film Registry.

All of the 2019 35 Gram Silver Australian Alien 40th Anniversary Foils in this listing are packaged inside of clear Perspex cases. The case has a frameless appearance courtesy of stainless steel fittings in the corners. The foil and Perspex case are shipped to you inside of a prestigious branded box that includes “ALIEN” and “40th Anniversary” printed on it.

On the reverse of 2019 Silver Australian Alien 40th Anniversary Foils is a depiction of the poster issued at release for the feature film. The poster itself offered a foreboding appearance and sign of the sheer terror to come in the film. The tagline “In space no one can hear you scream.” This tagline is below the egg-shaped alien structure that emits a yellow-green glow from the V-shaped crack in its base.

The obverse of 2019 35 Gram Silver Australian Alien 40th Anniversary Foils includes the repeating image of the full mint name and logo. “The Perth Mint” is printed on this side alongside the famous Swan logo of the mint.

Please feel free to contact Silver.com with any questions. You can call our customer service team at 888-989-7223, chat with us live online, or simply send us an email.