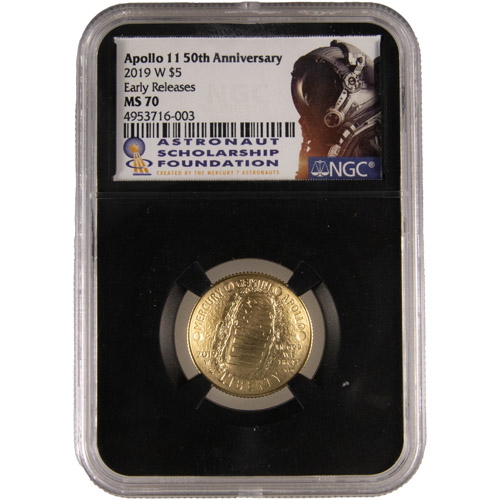 In 2019, the United States Mint marked the 50th anniversary of NASA’s Apollo 11 mission with the release of commemorative silver and gold coins. These coins all featured a shared design and offered impressive convex and concave surfaces, one of just a few domed coins the US Mint has ever issued. Now, certified-perfect 2019 Gold $5 American Apollo 11 50th Anniversary Coins are available to you for purchase online from Silver.com.

In July 1969, NASA launched the Apollo 11 mission with the purpose of sending humans to the Moon and returning them safely to Earth. In a rousing speech during his presidency, John F. Kennedy challenged the nation to meet the obstacles in front of it during the Space Race with the Soviet Union.

After the Soviets were the first to launch an orbiting satellite and the first to send a human into orbit, President Kennedy rallied the American people and laid down a gauntlet for both the nation and NASA. His challenge: send mankind to the Moon and bring those astronauts safely home. Oh, and it needed to be done by the end of the decade.

An astronaut footprint features in the lunar surface on the obverse of 2019 Gold American Apollo 11 50th Anniversary Coins. This field of the coin has a concave surface, lending depth to the design.

Silver.com offers these coins to you at random after your payment has cleared. We cannot guarantee the specific labels or grading house in advance. If you buy more than one, please note you may get coins with matching labels.