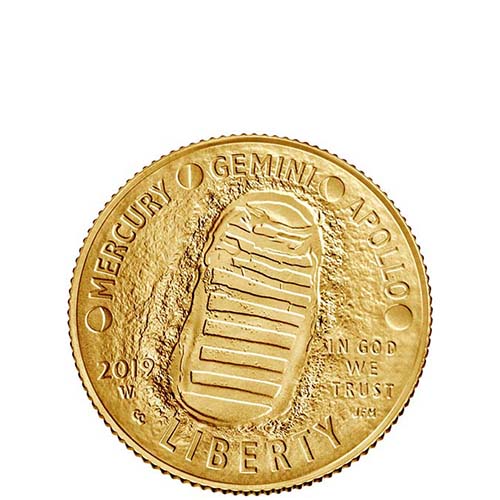 The Apollo 11 50th Anniversary Collection of silver and gold for sale from the United States Mint offers a shared design for all five releases. Each coin, bullion and proof alike, available in the collection comes with a US Mint display box and a Certificate of Authenticity. The 2019 $5 Gold American Apollo 11 50th Anniversary Coins are available to you online today at Silver.com.

In the Apollo 11 50th Anniversary collection, the United States Mint offers a total of five different coins. These include a 1 oz silver bullion coin, 1 oz proof silver coin, 5 oz proof silver coin, gold proof coin, and these gold bullion coins. The gold coins in this series are struck at the United States Mint’s West Point Mint facility with a “W” mint mark, while the silver coins come from the Philadelphia Mint and have “P” mint marks.

Each of the 2019 $5 Gold American Apollo 11 50th Anniversary Coins features 90% gold content with an alloy composition that includes 6% silver and a balance of copper. The coins weigh roughly the size of the 1/4 oz Gold American Eagle Coin.

On the obverse of all 2019 Gold American Apollo 11 50th Anniversary Coins have a design that depicts the footprint of an astronaut on the moon’s surface. Engravings include images of four moon phases and the words “Mercury, Gemini, Apollo” along the top rim. Other engravings include “In God We Trust,” “Liberty,” “2019,” and the “W” mint mark.

The reverse face of 2019 $5 Gold American Apollo 11 50th Anniversary Coins features a close-up visual of Buzz Aldrin’s helmet and visor. Captured in the reflection of his visor is Neil Armstrong on the moon’s surface with the American flag visible next to the Eagle lunar lander. This design is recreated from an actual photo Aldrin took during the mission.

Apollo 11 was an eight-day mission that sent a three-man crew into space with the expressed goal of landing mankind on the moon for the first time ever. Aldrin and Armstrong spent a total of 21.5 hours on the lunar surface. These coins are shipped to you inside of protective capsules and US Mint boxes with a Certificate of Authenticity included.

We encourage Silver.com customers to call us with questions about these gold coins at 888-989-7223. You can also reach out to us online using our live chat and email address features.