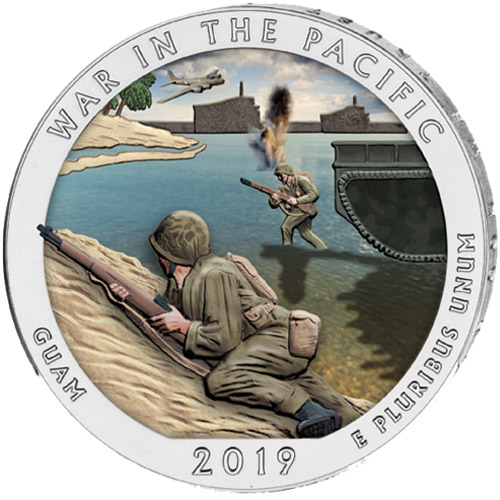 The silver for sale in the America the Beautiful series from the United States Mint includes two main options. The coins are produced by the US Mint in a bullion version and a burnished, collectible version. However, some of the bullion coins are often colorized by third-party dealers for a distinctive look. Right now, 2019 5 oz Colorized Silver ATB War in the Pacific National Historical Park Coins are available to purchase online at Silver.com.

Each of the individual 2019 5 oz Colorized Silver ATB War in the Pacific National Historical Park Coins in this listing comes to you with its own protective plastic capsule. The coins and capsules are housed inside of protective display cases that have “America the Beautiful” printed on the front along with the heraldic eagle seal.

In June 1941, Japanese forces attacked and overran American defenses on the island of Guam. The island is the largest in the Northern Mariana chain, but is a self-governing territory of the US separate from the other islands of the CNMI. In July 1944, the United States returned and attacked Guam. Over the course of more than six weeks, US Marines, soldiers, and sailors defeated the Japanese to retake the island.

On the reverse of these 2019 5 oz Colorized Silver ATB War in the Pacific National Historical Park Coins is the image of American forces coming ashore on Guam using Higgins landing boats. The scene is captured in beautiful colors with the uniforms of soldiers, colors of the sky, beaches, and jungles all appropriate to the actual setting in Guam.

The obverse of 2019 5 oz Colorized Silver ATB War in the Pacific Coins features the left-profile image of President George Washington. This image has been on the US quarter since 1932 when John Flanagan designed a portrait of the nation’s first president in honor of his 200th birthday.

If you have any questions about these coins, please contact Silver.com. Our customer service team is available at 888-989-7223, online using our live chat, and via our email address.