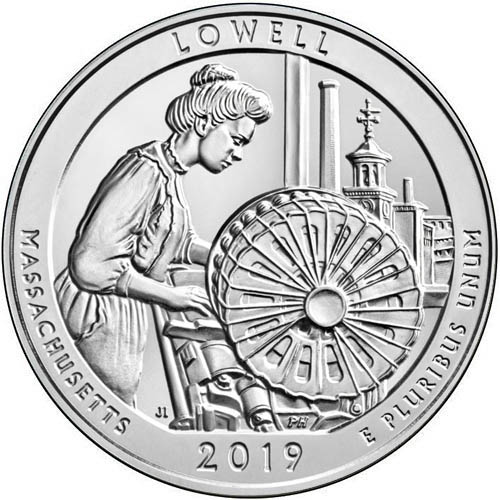 In the America the Beautiful Series, investors and collectors will find something to pique their interest in this US coin series. The ATB Collection includes five new designs with each release year in the form of bullion and burnished coins. The 2019 5 oz Silver ATB Lowell National Historical Park Coin is the first in the 2019 ATB Series and is available to you now at Silver.com.

The first European settlers to arrive in the area now known as Lowell, Massachusetts, arrived in the 17th century. Over the next 100 years, the region would become one of the most vital to the young United States of America. By the early 1820s, Lowell and its surrounding communities had become home to an important manufacturing center that stretched along the Merrimack River.

On the reverse of 2019 5 oz Silver ATB Lowell National Historical Park Coins is the image of a woman working on a power loom with the image of the Boott Mill clock tower at the Boott Cotton Mill & Museum visible out the window in the background. Engravings include “Lowell,” “Massachusetts,” “E Pluribus Unum,” and “2019.”

The obverse of all 2019 5 oz Silver ATB Coins includes the left-profile portrait of President George Washington. The nation’s first elected president, Washington served two terms and had his portrait placed on the US circulating quarter in 1932 to mark the 200th anniversary of his birth.

We encourage Silver.com customers to call us with questions at 888-989-7223. You can also connect with us online using our live chat and email address features, or visit our silver price charts to follow changes in the spot price of metals.