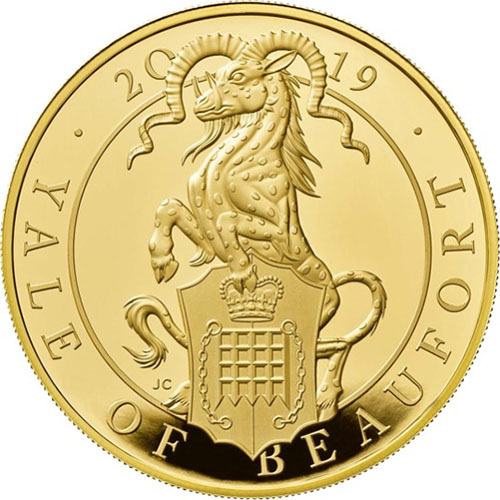 The Queen’s Beast Series of gold coins for sale from the Royal Mint includes six options for buyers. The bullion series has 1/4 oz and 1 oz coins, while the proof collection includes a further four coins. Only two of those gold weights are available only in the proof collectible version: 5 oz and 1 Kilo. The 2019 5 oz Proof Gold British Queen’s Beast Yale of Beaufort Coins are now available to you for purchase online at Silver.com

On the reverse side of 2019 5 oz Proof Gold British Queen’s Beast Yale of Beaufort Coins is the design of the crest carried by Lady Margaret and her son King Henry VII of England. The Yale is a mythical beast that was depicted often as an antelope or goat with tusks and horns on its head. The Yale is associated with a regal existence and supports the shield in this design.

Henry VII was the only child of Lady Margaret and come from her second marriage to Edmund Tudor. Henry VII’s victory over the Yorkist King Richard III at the Battle of Bosworth Field ended the Wars of the Roses in England and established the Tudor Dynasty as the ruling family in England. The Tudors would rule through Henry VII’s reign, his son Henry VIII’s reign, and the three children of Henry VIII: Edward, Mary, and Elizabeth I.

The obverse face of 2019 Proof Gold British Queen’s Beast Yale of Beaufort Coins includes the effigy of Her Majesty, Queen Elizabeth II. The Queen’s right-profile portrait as featured here is the fifth-generation design to feature during her reign. It was created in 2015 by Jody Clark for the Royal Mint of England.

These 2019 5 oz Proof Gold British Queen’s Beast Yale of Beaufort Coins come in stunning wooden display boxes from the Royal Mint with an individual capsule and a Certificate of Authenticity.

We encourage Silver.com customers to reach out to us with questions at 888-989-7223. You can also connect with us online through our live chat service and email address features.