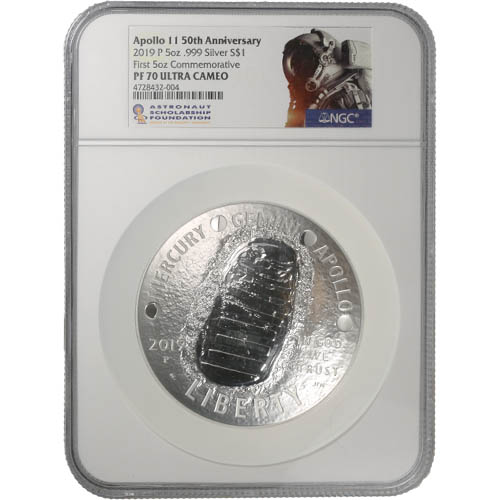 The United States Mint issued a series of gold and silver coins in 2019 to mark the 50th anniversary of the Apollo 11 mission. NASA’s landmark achievement in the 20th century happened in July 1969 when the three-man crew of Apollo 11 went to the moon, landed, and returned safely to Earth. Now’s the time to celebrate. The 2019 5 oz Proof Silver American Apollo 11 50th Anniversary Coin is now available to you for purchase online at Silver.com in perfect condition.

Over the course of eight days in July 1969, the world was transfixed as Michael Collins, Buzz Aldrin, and Neil Armstrong lifted off from Merritt Island, Florida, on a mission to land mankind on the moon for the first time in human history. Aldrin and Armstrong would touch down on the moon four days later and spend a total of 21.5 hours on the lunar surface.

The United States Mint marks the 50th anniversary of this accomplishment in 2019 with a variety of commemorative coins. The silver series features three .999 fine silver coins and additional silver-clad half-dollar coins. There are also gold coins in the series.

On the obverse of 2019 5 oz Proof Silver Apollo 11 50th Anniversary Coins is a concave field with the outline of an astronaut footprint on the surface of the moon. Engraved above it are the names of different phases of the moon.

The reverse side of 2019 Proof Silver American Apollo 11 50th Anniversary Coins has a convex, 3D field that recreates the image of a photograph taken on the moon. The scene is captured in the visor of Buzz Aldrin and shows Neil Armstrong standing on the surface of the moon with the American flag and Eagle lunar lander nearby.

These 2019 5 oz Proof Silver American Apollo 11 50th Anniversary Coins are in perfect condition according to the NGC. Coins with a PF70 certification have full, original mint luster and no detracting flaws of any type. The included UCAM designation stands for ultra-cameo and indicates the presence of strong, frosted matte finishes on the design elements and deeply-mirrored, clear background fields.

We encourage Silver.com customers to call us about silver for sale at 888-989-7223. You can also connect with us online using our live chat and email address features.