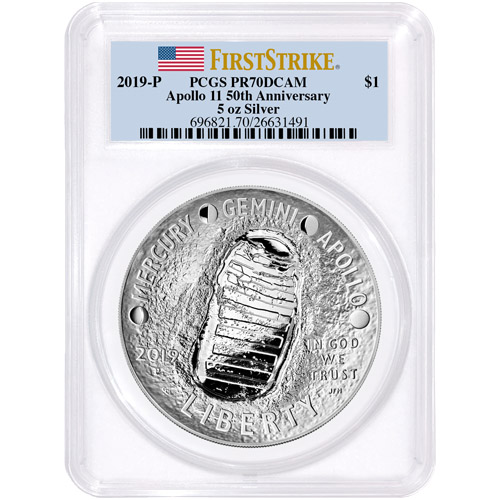 The largest coin in the commemorative silver collection from the United States Mint’s Apollo 11 Series is the 5 oz proof silver coin. Available with a face value of $1 (USD), the 5 oz proof brings the beautiful designs of the Apollo 11 Series to a larger surface than other options in the collection. The 2019 5 oz Proof Silver American Apollo 11 50th Anniversary Coins are available to you for purchase online right now at Silver.com.

All of the coins in the United States Mint’s Apollo 11 Series, both silver and gold, are domed products. The coins have concave design fields on the reverse side and convex, domed surfaces on the obverse side of the coin.

Apollo 11 was the fifth manned mission in the Apollo series at NASA. It was the first in human history to send human beings to another celestial body and return them safely to the surface of the Earth. Neil Armstrong, Buzz Aldrin, and Michael Collins were the three-man crew involved in Apollo 11, but only Armstrong and Aldrin actually descended to the Moon.

The reverse face of 2019 Proof Silver American Apollo 11 50th Anniversary Coins features a depiction of a photograph taken during the mission. The photo of Buzz Aldrin captured a perfect reflection in his visor of Neil Armstrong, the Eagle lunar lander, and the American flag on the Moon’s surface.

These 2019 5 oz Proof Silver American Apollo 11 50th Anniversary Coins are available to you inside of protective plastic slabs. The coins earned PR70 certifications that mean each coin has full, original mint luster and not detracting flaws. The included First Strike slab means the coins arrived for certification within the first 30 days of their release from the United States Mint.

We encourage Silver.com customers to reach out to us with questions at 888-989-7223. You can also connect with us online using our live chat and email address.