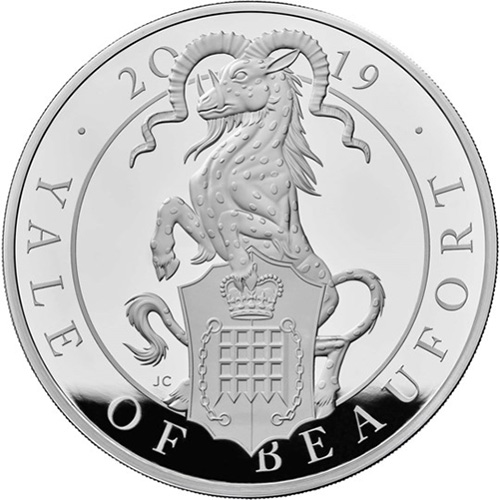 The Queen’s Beast Series from the Royal Mint of England offers a 10-design series that features each of the 10 heraldic beasts represented in statue form at the 1953 coronation ceremony of Queen Elizabeth II. The sixth of these beasts to feature in the proof range is the Yale of Beaufort. Right now, 2019 5 oz Proof Silver British Queen’s Beast Yale of Beaufort Coin is available to purchase online at Silver.com.

Each of the individual 2019 5 oz Proof Silver British Queen’s Beast Yale of Beaufort Coins comes in beautiful presentation packaging. The coins are individually encapsulated and set within a Royal Mint of England display box. The coins each come with a numbered Certificate of Authenticity.

Lady Margaret was the only heir of John Beaufort, the Duke of Somerset. She was an influential figure throughout England’s Wars of the Roses that culminated in her son Henry’s victory over King Richard III and the establishment of the Tudor Dynasty. Lady Margaret survived her son’s reign to see her grandson Henry VIII rise to the throne.

The obverse of 2019 Proof Silver British Queen’s Beast Yale of Beaufort Coins bears the effigy of Queen Elizabeth II. Her Majesty’s effigy as depicted here shows her at the age of 89 and was created in 2015 by Jody Clark.

If you have any questions about silver coins, please don’t hesitate to ask. You can call us at 888-989-7223, chat with us live online, or email us directly.