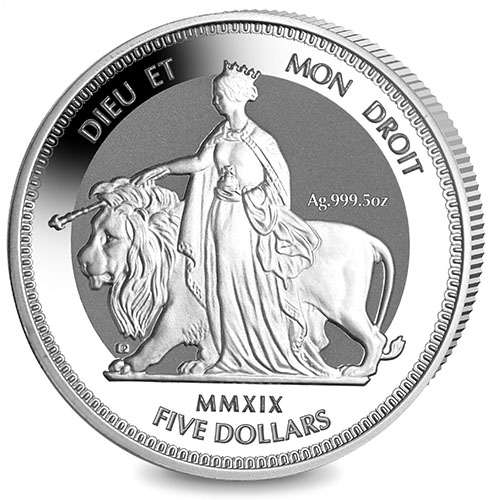 The Una and the Lion coin design offered by the Pobjoy Mint is an image debuted on British gold coins exactly 180 years ago during the reign of Queen Victoria the first. The Silver BVI Una and the Lion coins revive this beautiful image in 2019 to mark the 200th anniversary of Victoria’s birth. Now, 2019 5 oz Silver British Virgin Islands Frosted Una and the Lion Coins are available to you for purchase online at Silver.com.

Edmund Spenser’s 1590 poem entitled The Faerie Queene was the inspiration for an 1839 British coin design from William Wyon. To celebrate the 1837 coronation of Queen Victoria, Wyon created a design that captured her figure as Lady Una in the Una and the Lion design used on a 5 Pound sterling British gold coin that debuted in 1839.

Wyon’s design was considered slightly controversial in its day because it was the first to ever depict a monarch as a fictional character. In the design, Queen Victoria was depicted walking on the left side of a massive lion. The male lion, in the poem, is attracted to the beauty of Lady Una and follows her as a companion and protector after meeting her.

The reverse of the 2019 5 oz Silver British Virgin Islands Frosted Una and the Lion coin revives that stunning coin design. Here, Queen Victoria walks on the lion’s left while holding a scepter in her right hand. The male lion walks alongside Victoria on her right. The inscription above Queen Victoria’s figure on this side reads “DIEU ET MON DROIT.” This is Latin for “God on my Right,” the official motto of the British Monarch.

On the obverse of 2019 5 oz BVI Frosted Una and the Lion Coins is Queen Victoria’s great-great-granddaughter, and current British monarch, Queen Elizabeth II. Her Majesty is featured here in right-profile relief in a design made exclusively for the Pobjoy Mint by Jody Clark.

All British Virgin Islands coins are produced with the authority of the local government by the Pobjoy Mint, England’s only private mint and the largest family-owned mint in Europe. BVI coins used the United States dollar as the official currency and have since 1959 to match the US Virgin Islands financial currency.

We encourage Silver.com customers to call us at 888-989-7223 with questions when buying silver. You can also connect with us online using our live chat and by sending us an email.