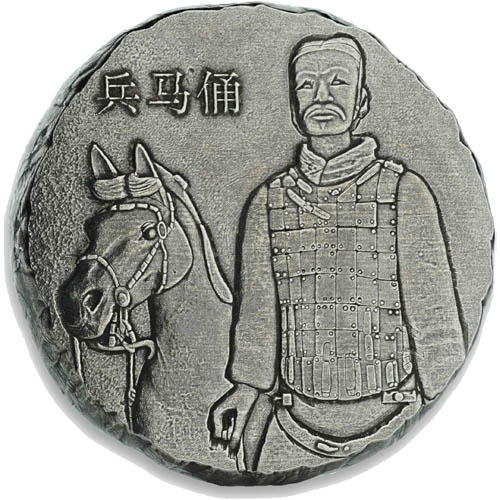 Qin Shi Huang was the first Emperor of China. He had previously been the King of Qin from 247 BC to 221 BC when he unified the kingdoms of China into one singular empire. He ruled that empire for a total of 11 years from 221 BC until his death in September 210 BC. The Terracotta Army was designed as funerary art as a symbolic force to protect him in the afterlife.

All of the 2019 5 oz Silver Fiji Terracotta Army Coins in this product listing come to you with a beautiful antique polish that creates the visual appeal of ancient currency. The coins have what the Scottsdale Mint calls a “ruptured” edge. In reality, it is a rough edge that looks as though the entire coin was chiseled straight from a block of granite. These coins are shipped individually with a stamped drawstring pouch and come with a Certificate of Authenticty.

A terracotta warrior is featured on the obverse of the 2019 5 oz Silver Fiji Terracotta Army Coin. This soldier stands next to his horse and is accompanied by four symbols inscribed on Mandarin Chinese. Those same four symbols can be found stamped on the outside of the drawstring pouch the coin ships inside.

The Fijian coat of arms is depicted in the reverse design element of the 2019 Silver Fiji Terracotta Army Coins. The national emblem of Fiji is supported on either side by native Fijians and topped with a Polynesian canoe that features an outrigger. The shield itself is quartered with native flora and fauna depicted in each of the individual quadrants. There is also a lion in passant guardant pose at the top of the shield.

Please don’t hesitate to reach out to Silver.com with questions about these silver coins for sale. You can reach us on the phone at 888-989-7223, chat with us live online, or email us directly.