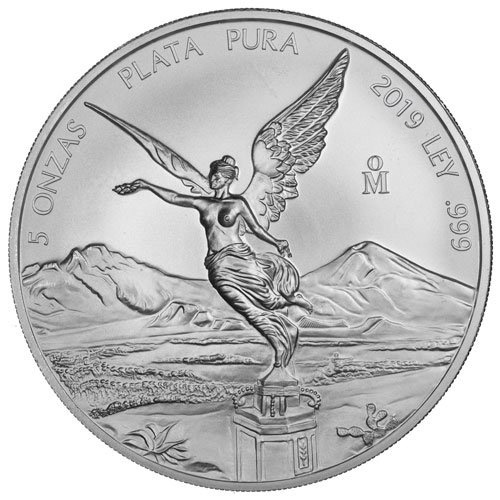 2019 marks the 24th issue for two of the silver coins in the seven-coin Silver Mexican Libertad collection from the Mexican Mint. The 2 oz and 5 oz coins in the Silver Libertad collection debuted in 1996 and have been struck in relatively low numbers in every year since the debut of both weights. The 2019 5 oz Silver Mexican Libertad Coin is currently available to you for purchase online at Silver.com.

Silver Mexican Libertad coins have, in general, been available for almost 40 years. However, the 1 oz coin that debuted in 1982 was the only offering in the series until 1991. That year saw the introduction of four fractional-weight coins. It wasn’t until 1996 that the Mexican Mint introduced the two largest coins in the collection in the form of the 2 oz and 5 oz Silver Libertads.

For the most part, the highest mintage figures for these two larger coins in the Silver Libertad series came in 1996 when they debuted. The 2 oz coin, for example, has never surpassed its 1996 release figures. However, these 5 oz Silver Mexican Libertad coins did surpass their debut figure of 20,000 by selling 21,000 coins in 2009. Most recently, the 5 oz Silver Libertad jumped from just 5,050 coins in 2017 to 16,600 coins in 2018. That 2018 mintage marks third-highest figure ever for this weight.

On the obverse of 2019 5 oz Silver Mexican Libertad Coins is the design of Winged Victory. A symbol of the people’s revolution against Spanish colonial control in Mexico in the 1820s, Winged Victory holds a wreath crown in her right hand and the broken chains of servitude in her left hand. She stands tall atop the Mexican Independence Victory Column to this day in the heart of Mexico City.

The reverse face of 5 oz Silver Mexican Libertad Coins includes the modern coat of arms for Mexico in the center. This image features an eagle resting on the arm of a cactus while it battles with a serpent. Around it are 10 historic versions of the same seal which have been used by the government over the course of nearly two centuries of independent rule.

We encourage Silver.com customers to call us with any questions at 888-989-7223. You can also connect with us online through our live chat and email address features.