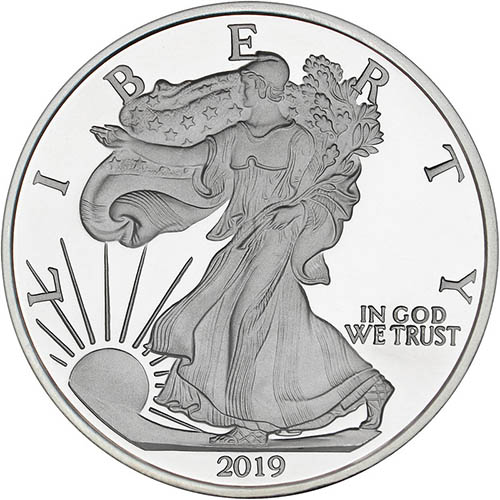 SilverTowne is one of the most prominent private mints in the United States. Though it offers a variety of options to those who buy silver, among its most popular products are silver rounds with historic US coin designs. Right now, 2019 5 oz Silver SilverTowne US Eagle Replica Rounds are available to purchase online at Silver.com.

Each 2019 5 oz Silver SilverTowne US Eagle Replica Round available to you here today comes inside of heat-sealed plastic individual packaging. The rounds in this listing feature the same primary design elements found on the massively popular Silver American Eagle bullion coins from the United States Mint.

On the obverse side of the 2019 5 oz Silver SilverTowne US Eagle Replica Round is the vision of Walking Liberty. Created in 1916, it featured on the US half-dollar coin until 1947. It depicts Lady Liberty walking toward the setting sun on the horizon as she wears the American flag draped over her shoulders. The design is meant to reflect the nation’s drive toward a brighter future.

The reverse of 2019 Silver SilverTowne US Eagle Replica Rounds includes the modern version of the heraldic eagle. This seal has been used on US coins dating back to the first coins struck by the US in 1794. It depicts an American bald eagle behind the national shield clutching arrows and an olive branch in its talons. There is a triangular cluster of 13 stars over its head representing the original American Colonies.

These designs come from the Silver American Eagle coin. Adolph A. Weinman created Walking Liberty in 1916 for a US Mint contest to replace the designs of Charles E. Barber on certain US denominations. The heraldic eagle featured here was created in 1986 by John Mercanti, the man who later served as 12th Chief Engraver of the United States Mint from 2006-2010.