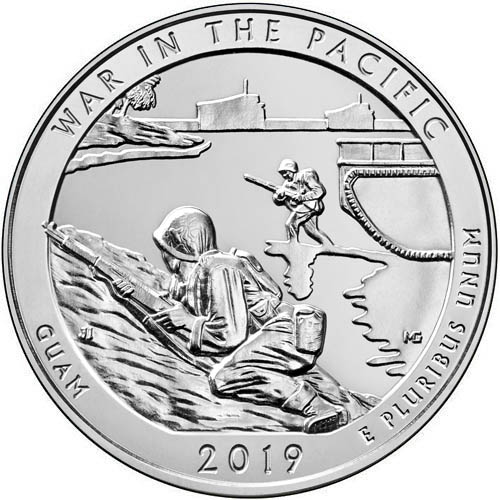 Guam is the westernmost point in the United States and the territory of the nation proudly stands behind its motto that the island is “Where America’s Day Begins.” A world away from the US mainland, Guam was the site of two major battles between the United States and Japan during World War II. Today, you can get your own beautiful 2019 5 oz Silver ATB War in the Pacific National Historical Park Coin by selecting it from the Silver.com catalog!

All 2019 5 oz Silver ATB War in the Pacific National Historical Park Coins in this listing are available to you in Brilliant Uncirculated condition. The coins are housed by the United States Mint inside of individual protective plastic, mint tubes of 10 coins, or Monster Boxes of 100 coins. The Monster Box includes a total of 10 tubes of 10 coins each.

Located in Apra Harbor, the War in the Pacific National Historical Park in Guam was established in 1978 to honor all those who participated in the Pacific Theater during World War II. It is one of America’s more unique sites in the National Park System as it honors not only local Chamorro people and US Military personnel, but also those of Australia, Canada, Mexico, China, France, Great Britain, New Zealand, the Netherlands, and the Soviet Union who served in the Pacific.

On the obverse of 2019 Silver ATB coins is the left-profile portrait of President George Washington. The nation’s first president has featured on the US quarter since 1932 in a design from John Flanagan. The reverse of the 2019 5 oz Silver ATB War in the Pacific National Historical Park Coins include the image of American sailors, soldiers, and Marines storming Guam during the Second Battle of Guam in 1944 to retake the island from Japan.

Please feel free to reach out to Silver.com with questions when buying silver. You can call us on the phone at 888-989-7223, chat with us live online, or send us an email.