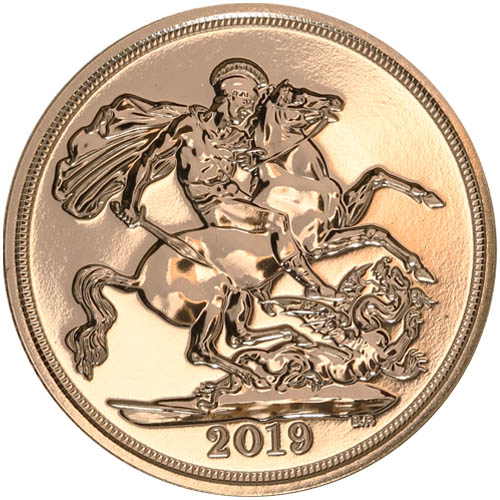 One of the most well-known gold coins in the world is the gold sovereign of Great Britain. The British Gold Sovereign coin is based on the original English gold sovereign issued from 1603 and was reintroduced in 1817 following the Great Recoinage of 1816. Right now, 2019 Gold Great Britain Sovereign Coins are available to purchase online at Silver.com when you buy gold.

Each of the 2019 Gold Great Britain Sovereign Coins in this listing at Silver.com comes in Brilliant Uncirculated condition. The coins are offered by the Royal Mint inside of either individual protective packaging or mint tubes of 25 coins.

Gold Great Britain Sovereign Coins were reintroduced in 1817 and struck through 1914 when World War I’s outbreak resulted in a cessation of gold coin issuance in many European nations. The Gold Sovereign returned in 1957 during the early years of Queen Elizabeth II’s reign only as a gold bullion coin. In 1979, a gold proof version of the sovereign was introduced for collectors as well.

On the obverse of 2019 Gold Great Britain Sovereign Coins is the image of Her Majesty, Queen Elizabeth II. The Queen’s effigy is regularly updated for use on British coins and this is the fifth-generation design that was completed in July 2015 by Jody Clark. The Royal Mint began to use the design on coins dated 2016 from the Royal Mint. It features Queen Elizabeth II wearing the Royal Diadem crown.

The reverse side of 2019 Gold Sovereign Coins from Great Britain features the iconic design of St. George riding on horseback as he slays the dragon. St. George is the patron saint of Britain and is often depicted in artwork slaying a dragon. This design was created in 1817 by Benedetto Pistrucci for the first issuance of gold sovereigns during the reign of King George III. Pistrucci’s design has been used on the reverse for most releases of the coin since 1817 with the exception of some issue years during the reign of Queen Victoria, the great-great-grandmother of Queen Elizabeth II.

The Royal Mint of England has more than 1,100 years of experience striking coins. Originally founded in the 9th century in London, the Royal Mint has managed the production of British coins for more than a millennium.

If you have any question for Silver.com customer service, don’t hesitate to reach out to us. You can call us at 888-989-7223, chat with us live online, or email us.