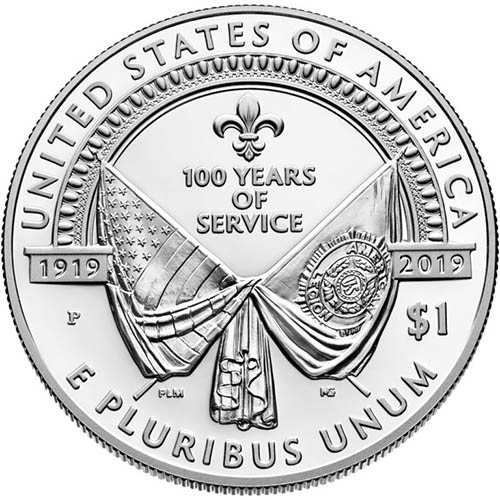 There are new silver dollar coins available from the United States Mint in 2019 to mark the 100th anniversary of the founding of the American Legion. Founded by American service members during the aftermath of World War I, the legion organizes community events to honor veterans, is involved in children and youth activities in local communities, and lobbies on behalf of veterans, service members, and their families. The 2019-P $1 Proof Silver American Legion 100th Anniversary Coin is currently available to you for purchase online at Silver.com.

On the obverse side of 2019-P $1 Proof Silver American Legion 100th Anniversary Coins is the design of the American Legion emblem. The emblem features a geometric design around the outer edge, a circular rim with the words “American Legion” inscribed, and a five-pointed star in the center with “US” inscribed on it.

These 2019-P $1 Proof Silver American Legion 100th Anniversary Coins are available to you with a protective capsule, US Mint velvet-lined presentation box, and a Certificate of Authenticity from the US Mint.