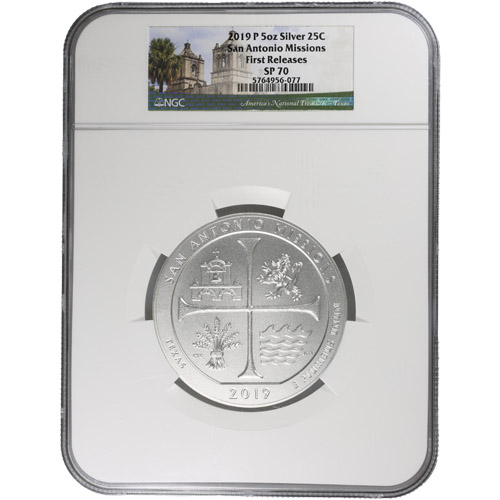 No America the Beautiful silver quarter collection is complete without the coin representing Texas. And if you’re going to buy it, why not purchase it in stunning, perfect condition? The 2019-P 5 oz Burnished Silver ATB San Antonio Missions Coins in this listing have received SP70 grades from NGC as flawless specimens for your collection.

The obverse design of ATB coins is common to all in the series, including this one. It features George Washington. The portrait is familiar to anyone who collects coins or has ever handled change. John Flanagan designed it to appear on the quarter in 1932 in commemoration of Washington’s 200th birthday. It’s appeared on the obverse of quarters since.

On the reverse of the 2019-P Burnished Silver ATB San Antonio Missions Coin you’ll find four symbols separated by a cross figure. The symbols represent various aspects of the location and the community that built up there. The design includes waves for the river, lion for culture, bells and arches for community and wheat for farming and agriculture.

Your coin will arrive in a protective plastic slab with a Specimen 70 grade. Coins in this condition have full, original mint luster with no flaws present. The First Release designation indicates a coin the NGC received for grading within 30 days of issue from the mint.

The 2019-P Burnished Silver ATB San Antonio Missions Coin is the 49th coin issued in the 56-coin America the Beautiful series. The ATB program set out to capture iconic parts of the American landscape and history. Each state, territory and federal district is represented by a coin that depicts a monument or location of note in that area.

The San Antonio Missions Coin uses symbolic elements to convey important information about the communities set up by four missions hundreds of years ago. The Spanish settlers in pre-America Texas contributed a lot to the culture of the area, and those influences remain today.

Order your 2019-P Burnished Silver ATB San Antonio Missions Coin today at Silver.com. Supplies are limited, so don’t wait too long. You can call us at 1-888-989-7223 or reach out via chat or email if you have any questions.