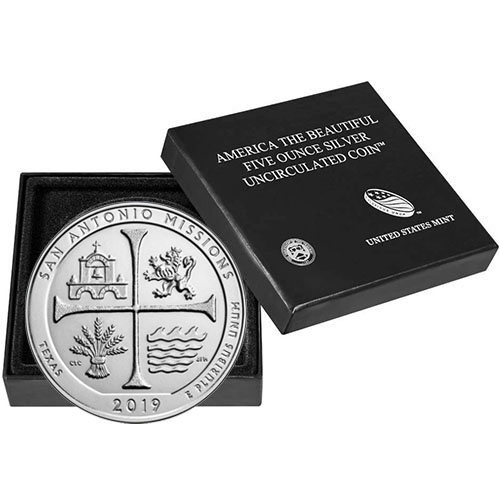 In the America the Beautiful Series from the United States Mint, there are 56 different silver coins for sale to collectors and investors in this collection. Designs are released five per year and the collection debuted in 2010. Today, 2019-P 5 oz Burnished Silver ATB San Antonio Missions National Historical Park Coins are available to you online at Silver.com.

San Antonio Missions National Historical Park protects four of the five major Spanish frontier missions established around San Antonio. The missions formed the backbone of a colonization system by the Spanish throughout the southwest and Mexico in the 17th, 18th, and 19th centuries. The missions enabled Catholic missionaries to preach their faith to the people colonized in the region. San Antonio Missions National Historical Park is not just a national landmark in America, but is also a UNESCO World Heritage Site.

All of these 2019-P 5 oz Burnished Silver ATB San Antonio Missions National Historical Park Coins are available to you with a US Mint presentation box and a Certificate of Authenticity. The burnished coins are vapor blasted after minting for a matte finish that is different than the shinier appearance of the bullion coins.

On the reverse of 2019-P 5 oz Burnished San Antonio Missions National Historical Park Coins are images inspired by the Spanish colonial Real coin issued in the area over 300 years. the design field includes the arches and bell symbolizing community, the lion symbolizing Spanish heritage, the waves of the San Antonio River, and wheat symbolizing farming.

The obverse of 2019 Burnished San Antonio Missions National Historical Park Coins features the left-profile bust of President George Washington. This is a modernized vision of John Flanagan’s 1932 design created for, and still in use on, the US circulation quarter. All Burnished ATB Coins have a mint mark of “P” on the obverse from the Philadelphia Mint.

Please feel free to reach out to Silver.com with your questions. You can call us on the phone at 888-989-7223, chat with us live online, or simply email us.