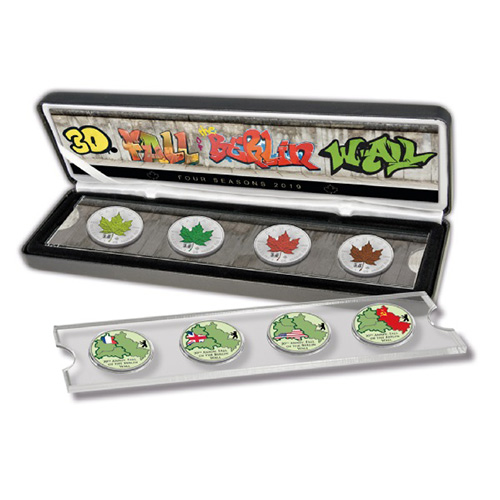 There’s nothing quite like the silver for sale in the Four Seasons range of collectible coins. These products reflect popular silver bullion coins released annually, including the Silver Canadian Maple Leaf and Silver American Eagle. However, colorization and distinctive themes make them a collectible hit. Today, 2019 Silver Canadian Maple Leaf Berlin Wall Edition Four Seasons Coin Sets are available to you online at Silver.com.

Almost immediately after World War II was over, the Allies and Soviets were vying for influence in a rebuilding Europe. This struggled focused on the city of Berlin in a defeated Germany. The Allies occupied three sections of Berlin and greater West Germany, while the Soviets controlled East Germany, East Berlin, and built the infamous Berlin Wall to surround West Berlin.

All of these 2019 Silver Canadian Maple Leaf Berlin Wall Edition Four Seasons Coins are available to you inside of a beautiful four-coin presentation case with a Certificate of Authenticity included. The individual coins are in Brilliant Uncirculated condition and are housed together within acrylic turning capsules allowing you to easily view the colorized designs on either side of the coin.

The obverse of 2019 Silver Canadian Maple Leaf Fall of the Berlin Wall Coins doesn’t feature Queen Elizabeth II, but rather a colorized political map of the City of Berlin. Each coin features the full-color national flag of a different nation that secured a portion of Berlin. There are designs including the French flag, British Union Jack, and US Stars and Stripes over West Berlin, with the Soviet flag over East Berlin. The rampant bear from the shield of West Berlin is featured on the design field as well.

In order to try and get a stranglehold on Berlin, the Soviets constructed the Berlin Wall. At first, it merely separated West Berlin from East Berlin with a barrier to control movement between the halves of the city. Eventually, though, the wall surrounded the entirety of West Berlin to cut it off from the rest of East Germany. That wall fell in dramatic fashion through popular uprisings in 1989.

On the reverse of 2019 Silver Canadian Maple Leaf coins in this set is the sugar maple leaf from Walter Ott. Each coin has a different colorization depicting a season of the year, with bright green, dark green, red, and brown to match the seasons.