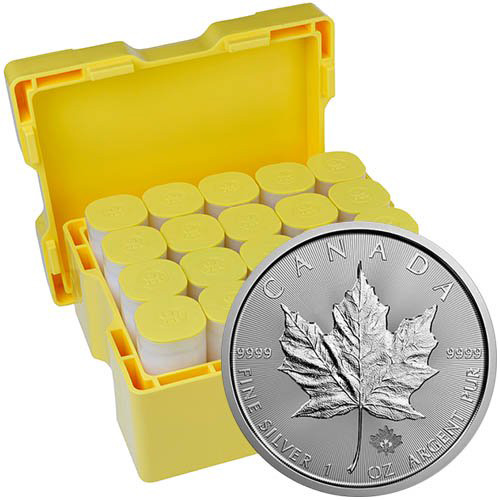 Among the silver for sale to precious metal investors, the Silver Canadian Maple Leaf stands out in the crowd. On one side it has the image of the reigning monarch of the United Kingdom due to Canada’s status as a Commonwealth nation. The other side prominently features the national symbol of Canada, the sugar maple leaf. Today, 2019 Silver Canadian Maple Leaf Monster Boxes are available to you online at Silver.com.

Through this Silver.com listing, you can purchase a total of 500 Troy ounces of .9999 fine silver. These 2019 Silver Canadian Maple Leaf Coins are all in Brilliant Uncirculated condition and housed within a Monster Box. The Monster Box itself contains a total of 20 individual tubes, each tube holding a total of 25 coins.

On the obverse of each 2019 Silver Canadian Maple Leaf Coin is the effigy of Queen Elizabeth II. Her Majesty is the reigning monarch of the United Kingdom, which includes Commonwealth nations like Canada. This is the fourth-generation design of Her Majesty to feature on Canadian coinage since 1952 and the first of a monarch since that of her father, King George VI, to depict a leader without their crown. The design was completed in 2003 by Susanna Blunt.

The reverse of 2019 Silver Maple Leaf Coins includes the sugar maple leaf. This popular design features on the gold, platinum, and palladium versions of the coin as well and was designed in 1979 by Walter Ott for use on the Gold Maple Leaf. The sugar maple is one of the most widespread tree species in North America and has been a symbol for Canada since the mid-18th century.