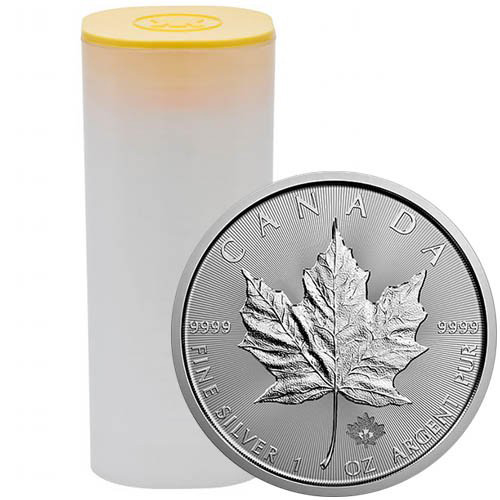 The Silver Canadian Maple Leaf Coin holds a unique position in the global precious metals market. Though its mintage figures pale in comparison to those of the Silver American Eagle, it is equally recognized by global investors as a primary option when buying silver. The 2019 Silver Canadian Maple Leaf Tube is currently available to you for purchase online at Silver.com.

Silver Canadian Maple Leaf coins debuted from the Royal Mint in 1988, the same year the Platinum Maple Leaf was released. The Silver Maple Leaf was just the third major silver bullion coin introduced following the 1983 release of proof Silver Chinese Pandas and the 1986 issue of the Silver American Eagle bullion and proof coins.

On the obverse of all Silver Canadian Maple Leaf coins is the image of Queen Elizabeth II. This right-profile portrait was created in 2003 by Susanna Blunt for the Royal Canadian Mint as the fourth-generation effigy of Her Majesty. This particular design is the first depiction of a monarch on Canadian currency without a crown since Elizabeth II’s father, King George VI.

The reverse of 2019 Silver Canadian Maple Leaf coins features the sugar maple leaf. The official symbol of Canada, you’ll find the maple leaf design on countless government seals and private company logos. This particular depiction comes from Walter Ott and was designed in 1979 for the debut of the Gold Maple Leaf.

These 2019 Silver Canadian Maple Leafs are all in Brilliant Uncirculated condition. This listing offers the 2019 Silver Maple Leafs to you inside of a mint tube containing a total of 25 coins in all.

The Royal Canadian Mint strikes the Silver Canadian Maple Leaf for the nation. The mint was founded in 1908 and today consists of facilities in both Ottawa and Winnipeg. The mints fulfill different roles, however. The Ottawa Mint strikes bullion and commemorative coinage while the Winnipeg Mint strikes circulation currency.