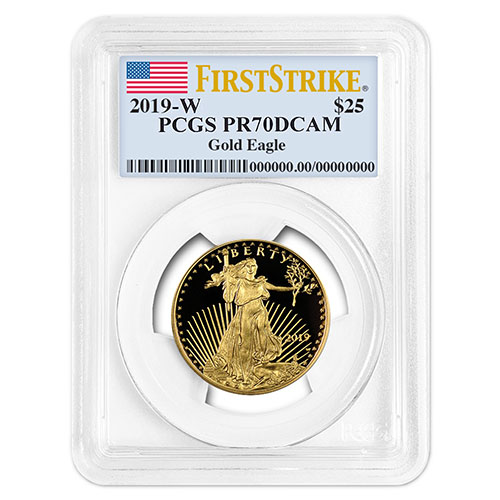 All three fractional-weight coins were originally produced at the Philadelphia Mint from introduction years until 1993, at which point they were then struck by the West Point Mint. Additionally, all Gold American Eagles had date marks in Roman numerals from 1986 to 1991, and since 1992 have used Arabic numerals instead.

On the obverse of 2019 1/2 oz Proof Gold American Eagle Coins is an image of Lady Liberty. Designed in 1907 by Augustus Saint-Gaudens, this creation of Liberty was made at the behest of President Theodore Roosevelt. He personally contacted Saint-Gaudens hoping the artist-sculptor would help revitalize the appearance of American coinage as the nation stepped out onto the broader international stage in the early 20th century.

Deep-cameo is a term referring to the strong, frosted matte design elements and deeply-mirrored, clear background fields of the coin. First Strike indicates the coins arrived for grading within the first 30 days of their release by the US Mint.