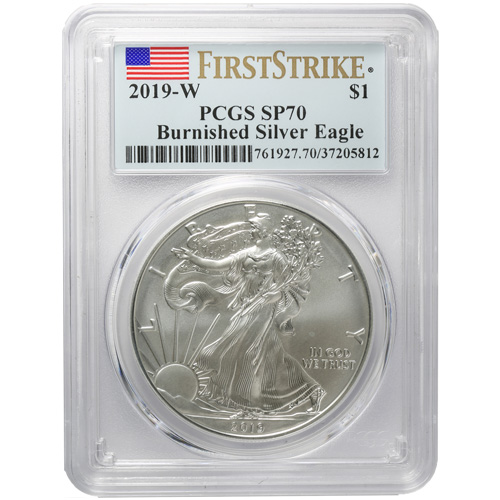 The introduction of the Burnished Silver American Eagle coin from the United States Mint came in 2006. This was the 20th anniversary of the Silver Eagle Series and the burnished coin offered a third option in the series, and a second option for collectors alongside the proof coins. The Burnished Silver Eagles have a matte finish and bear the “W” mint mark of the West Point Mint just like the proof silver coins in the collection.

All 2019-W 1 oz Burnished Silver American Eagle Coins in this listing are available to you in perfect condition according to the PCGS. Each one has full, original mint luster and no detracting flaws of any kind on the surface areas or design elements. The First Strike designation assigned to the coins means that each one arrived for grading within 30 days of their initial release by the United States Mint.

On the obverse side of 2019 Burnished Silver American Eagle Coins is the Walking Liberty image. This design was created in 1916 by Adolph A. Weinman and featured on the Walking Liberty Half Dollar coin from 1916 until 1947. The image captures Liberty in left-profile relief as she walks toward the sun on the horizon.

The reverse face of 2019-W 1 oz Burnished Silver American Eagles is a depiction of the heraldic eagle of the United States. This is a modern version of the historic seal and was introduced in 1986 on the Silver Eagle. The design was modified by John Mercanti who would later go on to serve as the 12th Chief Engraver of the United States Mint from 2006 to 2010.

Please feel free to reach out to Silver.com with any questions you might have about these coins. You can reach our customer service team at 888-989-7223, chat with us live online, or simply send us an email with your inquiries.