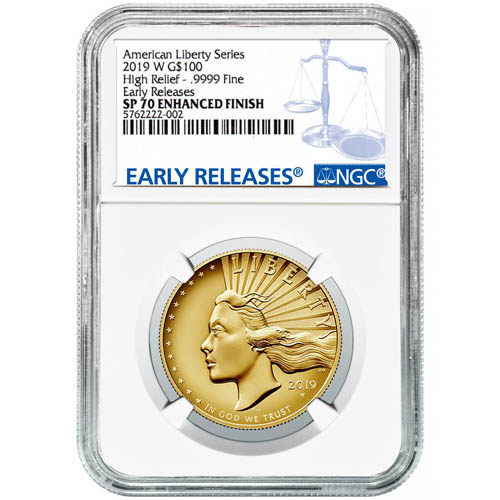 The American Liberty Series from the United States Mint aims to introduce coin collectors to new visions of Liberty inspired by American culture. The first design in the series was released in 2017 and depicted Liberty with African-American features for the first time ever as a nod to the nation’s rich cultural diversity. The second design in the series comes with yet another modern vision of Liberty. Today, 2019-W 1 oz Gold American Liberty High Relief Coins are available to you online at Silver.com with an NGC certification.

The United States Mint introduced the American Liberty gold coins for sale in 2017 to mark the 225th anniversary of the mint’s founding. The coins include high-relief finishes that bring greater 3D relief to the design elements on the coins. Each design in the series is created to deliver new images of Liberty for American coinage.

All 2019-W 1 oz Gold American Liberty High Relief Coins in this listing earned perfect certifications from the NGC. Coins with an SP70 certification have full, original mint luster and present with no detracting flaws of any kind. The included Early Release designation indicates the coins were received by the NGC for certification within the first 30 days of release in 2019.

On the reverse of 2019 Gold American Liberty High Relief Coins, you will find the image of an American bald eagle in flight. The bald eagle is an adept aerial hunter capable of spotting prey from high altitudes and when it does, it strikes swiftly. The bald eagle swoops down at intense speed to snatch its prey with its powerful talons.

The obverse of 2019-W 1 oz Gold American Liberty High Relief Coins includes a new rendition of Liberty for American coins. Liberty’s face is captured in left-profile relief with 13 brilliant rays of sunshine forming the crown on the top of her head. There are also 13 stars on this side of the coin, along with the West Point Mint’s “W” mint mark.

Please feel free to reach out to Silver.com with your questions. You can contact us at 888-989-7223, chat with us live online, or simply send us an email.