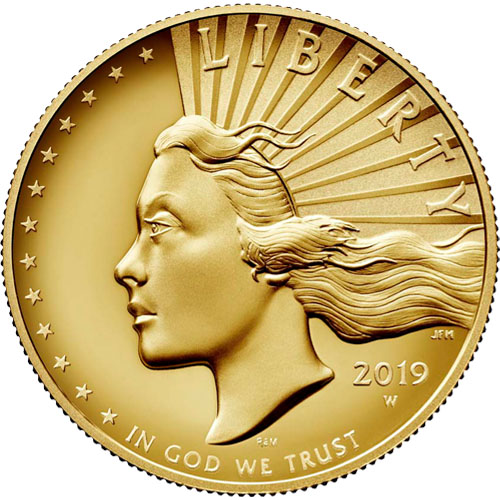 Any quantity available for $859.99 per coin over spot!

Over the course of more than 225 years, the United States Mint has offered many different visions of the female allegory for the United States of America: Liberty. Many of the visions of Liberty presented over the last two centuries have depicted Greco-Roman images of Liberty. The American Liberty High Relief Coins introduced in 2017 showcase the broader cultural heritage of America with new, modern images of Liberty. The 2019-W 1 oz Gold American Liberty High Relief Coin is the latest release in this collection and is available to you for purchase online right now at Silver.com.

The first release of the American Liberty collection came in 2017 as the United States Mint celebrated its 225 anniversary of its founding in 1792. The goal of the program is to offer new, modern images of Liberty on American coinage that better represents the diversity and rich cultural heritage of the American people.

That first gold coin for sale in the series captured a depiction of Liberty with physical traits representative of African-Americans. The design was offered with Liberty wearing a crown of stars and the design appeared first on 1 oz coins in 2017, followed by 1/10 oz coins in 2018. This new 2019 release offers another fresh vision of Liberty.

On the obverse side of 2019-W 1 oz Gold American Liberty Coins is a depiction of Liberty in left-profile relief. She is featured with soft facial features and 13 rays of sunshine emanating from the crown of her head. These rays form a crown and the word “Liberty” is engraved within the outer reaches of the rays near the edge of the design field. There are also inscriptions that include 13 stars, the “2019” date mark, a “W” mint mark from the West Point Mint, and the national motto “In God We Trust.”

The reverse of 2019 1 oz Gold American Liberty High Relief Coins features an American bald eagle in flight as it lands. The bird’s massive, powerful wings spread out behind it to soften its landing and its talons reach out to brace it as it clutches for its perch.

These 2019-W 1 oz Gold American Liberty High Relief Coins are shipped in black-lacquer hardwood boxes from the United States Mint. The coins are encapsulated within the box and come with a Certificate of Authenticity.

We encourage Silver.com customers to call us with questions at 888-989-7223. You can also reach out to us online through our live chat and email address options.